Industrialism Keeps Me Warm At Night -- Not Men 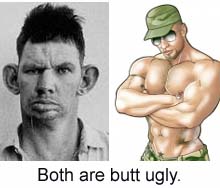 It should probably go without saying that given the choice between industrialism keeping me warm at night and men that I would go with industrialism every time. That is 100% true, but I want to make it very plain after some of the comments I got yesterday on my post, "Industrialism Keeps Me Warm At Night -- Not Women."

I wasn't expecting to delve into the subject of the butt ugliness of men today, since I thought that was a given. But, again, with the comments suggesting that I prefer men for keeping warm, as well as the rather obscure charge that I'm a "misogynist," I figured I needed to make my feelings crystal clear. (For those of you not with "the in crowd," according to Webster, a misogynist is a hater of women. That's ridiculous! Some of my closest relatives are women, including Grandma herself.) My point, and I may have been inelegant in my expression, was that I prefer industrialism and hard work for keeping me warm at night, not women. The same thing goes for men.

What is there that is so wonderful, so fascinating, and so warmth-giving, about industrialism? That's a great question. With industrialism, you have machines and tools that are fresh, vibrant, and given to durability and efficiency. You can wield the tools and weld the parts. The machines work in terrific sync with the mind of the worker, being an extension of the man. But with their great power, they'll be spitting out everything from paperclips to vats long after the worker has died at his post and has been replaced by his son. (We turn off the machines for 10 minutes in tribute to the fallen, then the whistle blows and it's back to work.)

In my own factory, I can have a whole team of men manning the stations and I'll stand there and do my part, or, all alone at night, I can go in, start up the line on "super slow," and work on a product all by myself. The machines clink and clank in harmony and the tools are pliant to my hand and demands. It's a thing of beauty, a hint of eternity's bliss. Surely, heaven will be full of enormous factories and tools up the yin yang.

Now, to answer some of my critics, might I prefer men for keeping me warm at night? By no means!

I look at the male form and I'm revolted, to say the least. I prefer the female form, even with the severe criticisms I leveled against it. And since there's basically one thing on the man's body that makes him a man, let's just cut to the chase and address it. But, again, since I don't do blue material, I'm going to have to be a little vague on the terminology I use to describe the male "business."

You've got -- in the "business" region of the male form -- a bit of "business" that you can't miss. It's more or less oblong with more length than girth. It has two general states, the quiescent or detumescent state and the tumescent or hardonescent state. To give the best description of it, just let me say you know the difference when you see it. In the former state, it's shrunken and looks like a wrinkled, boneless finger, aimed downward. In the latter state, it points toward the north star and can fill the room; it's definitely the center of attention when it's most active.*

Now, is this male member attractive or butt ugly? I insist that it is butt ugly. For the excited possessor of it, there can be no greater treasure, that much is true. But for anyone unfortunate enough to be looking on, it is at the very least an annoyance, and at the best embarrassing. You have to think, Is this the best nature could do? To which I would say, Yes. But that's just it; it's a natural appendage with a natural function; it's not meant as an object of detached beauty, although some of these butt ugly men might be more beautiful if it were detached, their hormonal levels being out of whack. They think it's their source of power when all it is is a thing for urinary excretion and the occasional work of procreation. It's not something to keep you warm at night.

In my opinion, the more guys parade them around, the less desirable they'd be as a mate. How much better it'd be if they were fitted with a glass box, attached to a catheter for its most common use, and kept well preserved for the rarer instance of the procreative drive at the key time in their mate's estrous cycle. "Break Glass In Case of Ovulation," or perhaps if she's howling at the moon and can't be stilled any other way.

My opinion, then, is that nature got it right, but man, parading himself, showing up at the park, whipping it out behind every bush, and even trying to get cozy with knotholes in trees, is going too far. It's not that good looking! In fact, it's butt ugly. Keep it to yourself! The rest of us don't want to see it!

Then, all the other aspects of the male form, the head region, the neck, the torso, the legs, the feet, and working back up, the buttocks region itself, are butt ugly. As far as I'm concerned, it's similar to the problems of the female form, with so many extremes of largeness and smallness, and every other possibility of deformity, that the only fully accurate verdict that can be rendered is: BUTT UGLY. It's definitely not what I would like for keeping me warm at night, not by a long shot.

The best alternative, what I've found, and I hope others may discover this for themselves, is the hard but satisfying work of industry. If you're blessed to have your own factory, like so many in the Residential Industrial Movement, you can tinker around with the industrial forms to your heart's content. If you're simply a worker in someone else's facility, you can work on your own warmth issues during your regular shift and maybe on breaks, if they'll allow it.

Whatever your level of involvement in industry, may you stay warm every night, with a warmth you can be proud of in the morning!

"In approaching this subject, it behoves me to walk warily. For, to some writers so repulsive that they shirk even its necessary elucidation, it exercises a fascination upon others which is not conducive to sound reasoning. Has not a President of the Anthropological Institute declared that "so soon as a man begins to study phallicism he goes crazy"?

Since I don't want to go any crazier than I already am, I shall not say much more about the subject. Instead, I'll find my warmth in industrialism, thank you very much.
Posted by dbkundalini at 4:34 AM