Standing My Ground At The Industrialists' Park 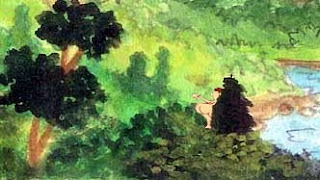 I thought I was witnessing a revolving door, so many guys showing up at the industrialists' park and leaving just as fast. I don't know if I was attracting them or repelling them, or maybe it was a little of both!

I just happened to be in the neighborhood, and I'm no longer afraid of the major industrial powers and what they might do to me, so I went over. This is the park these guys have been known to hang out in. And at least for a while they were after me, making some very threatening moves on me.

Since then, for whatever reason, maybe to lure me into a sense of complacency, they've been hanging back. Meaning I've been able to visit their little love nest with impunity, getting no real trouble. A few of them coming out on an ATV one time. And to tell the absolute truth, there's been some activity when I've shown up that's been weird but I haven't been able to pin it on the industrialists explicitly.

Like today. I showed up and there was some weird activity right at the entrance, an orange pickup that could've been enemy industrialists. It was weird the way they came out of nowhere, like they were on patrol. But then, as though they'd been called off by a lookout or from headquarters, they turned in front of me and quickly exited the park. The timing was such that it was all suspicious, since there had been a train right there, separating me from the orange pickup's approach. Like they were using the train for cover.

Anyway, there was nothing hindering me from advancing on, so I went in and parked. Everything was very quiet. There was an empty car off to the southeast and that was it. Then, suddenly (did someone say everything was quiet!?), it was one car after another, a total of three or four, buzzing in, checking me out like I was fresh meat and buzzing out.

First, there was a guy in a German car (I'm sure it was a German car). He pulled right behind me. He turned and backed up in my direction. I was trying not to look, then as he was pulling away, I noticed some handmade signs in his back windows. But by now I couldn't read what they said. Nothing good, I'd guess, probably threatening: "We took Poland. We'll be back for you!"

Second, there was another guy who came in quick and buzzed around behind me and went out as fast as he came.

Third, the most interesting one. A guy in a red SUV pulled in and was staring at me. This is usually where I would've looked away, but this time I stood my ground and stared back. After 10-15 seconds he broke the stare and sped away. I turned to write these facts down, then when I did I was surprised to look up and see the guy off to my left, at the south. He wasn't approaching me but was approaching the path. His SUV was parked back to the southeast. I have his description, from his shirt to his shorts to the style of his cap.

Now I had something to observe! I kept watching as he walked the path to the south. He was completely in my sights ... until he disappeared behind some bushes or trees. I mentally wished him "a good time if that's what you're into," which I myself am not. To just go back there and ... whatever ... with whomever might be back there ... not my idea of a good time.

In only five minutes or so, he returned, again fully dressed. He either doesn't believe in foreplay or the afterglow isn't much. At this point he had his hands in his pockets and his head down, possibly from guilt. I noticed something I hadn't notice before, a watch on his wrist. Could it be a gift for favors rendered? Or a payoff to buy his silence? I was personally disgusted to think he's that kind of guy. But the evidence was mounting, in addition to the hot date he'd just had back there.

In the meantime, while this guy was back on the path, the second car from above (or one like it) buzzed back in and repeated his quick exit. The guy reminded me of a mosquito, his fast appearance and departure. Tijuana taxi.

As for our little friend on the path, now back in his SUV, it turned out that he and I were leaving at the same time. I thought I'd just drive over and buzz him and maybe work on his guilty conscience when I saw him firing up the SUV to leave. Now he's right behind me. So we're leaving together. I'm looking in the rear view mirror to make sure he's not trying to get me from behind. Some extra vehicular activity.

He seemed to be put off by my constant staring in the mirror. At this point I started thinking that he was thinking maybe I was an agent of some sort. Because suddenly he was on his best behavior. Except when I pulled out on the road, he went around me very quickly. I jotted down his license number in case there was any other trouble, and I've got it locked in my strongbox.

As we went on, he was slowed in traffic in the left lane and I buzzed by him in the right lane. I was muttering things like, "If you think you're going to wipe your hands on my shirttail, you better think again." Other things I was saying were, "I see you staring at me, sizing me up." And, "I'll lead the way, and you're right behind me, but that's as close as you're getting!"

As we got closer to town, he finally went one way and I another. It was then that I knew he'd had enough for the day. And that he wouldn't be back ... until his natural stamina returned, if you catch my meaning.
Posted by dbkundalini at 4:34 AM