Industrialism On A Roll 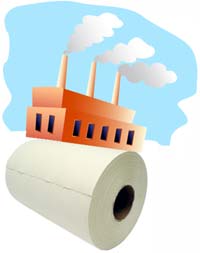 The economy has been in a downturn, a real lull. That's given all the experts something to mull, as is their role. But there's been at least one player on the national stage with some pull. Everyone else may be on the dole, but residential industrialism has been on a roll.

For a lot of folks, they're in a hole as big as the hull of the U.S.S. Cole, bombed, wasn't it near a foreign atoll? It's been a plague like the boll weevil. Or the dust bowl. Or having your garden eaten by a mole. Or your goat by a troll. The nation's hit a shoal.

But the market's been a bull for the residential industrialists, whose goal has been to avoid such a terrible toll. Everyone else's fortunes may be null, but our warehouse are full. It's been good for the soul. While the rest of the country no one can console, we've been leaping like a foal. And soaring like a gull. But for the others, their tongues always loll. A perpetual funeral.

Politicians this year will be sad and feeling dull as voters go to the poll. Not all, some will drink and say skoal. Personally, I'd like to cull a few and see them in gaol. Which is beyond my control.

But for at least one group of voters, their mood shall remain droll, the residential industrialists, in every way successful. And that's the whole point!
Posted by dbkundalini at 4:34 AM