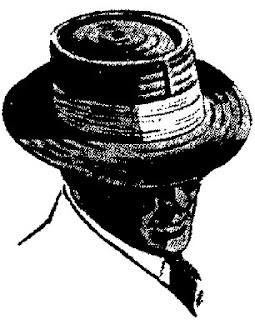 A few of you wrote in after my post yesterday on "My Upcoming Life of Crime" expressing concern about my plans. You had basically two objections:


1) The "bad example" I was setting for young people.
2) Concerns for my reputation.

Of course, I'm thankful for your concerns, and I understand what you're getting at. But with my new-found burgeoning criminal mindset, I must say, "Mind your own stinking damned business!" Nervous Nelly types aren't wanted here, even if you've been faithful readers all these years! My advice to you is keep your mouth shut before I come over and mess up your face...

But let's say I were to take your objections into consideration, just for laughs. First, I'm setting a bad example for young people. I seriously doubt I have that many young readers. But if I turn to a life of crime, I could argue I will finally get some. Because they're more excited by dudes living on the edge, much more so than by normal average old fuddy-duddies. I might get a younger demographic and finally get back to making Google Ads profits, maybe three figures. And as to my reputation, I gladly trample it underfoot! There's nothing more overrated than a reputation. The only people who care are spineless wimps also concerned about their reputation!

There is, however, another way of looking at things, something to note. Maybe your objections aren't taking in the full picture and all its angles. This takes some thought. Because maybe -- think about it -- going for a life of crime actually pays a compliment to the great system of law and order we have in America. As I said yesterday, my turning to crime (and it is after all only a fictionalized thing), was inspired by the writer Jean Genet's criminal choices. So I'm looking at it the way I perceive he looked at it. And therein is an interesting reversal...

In Genet's travels from France around Central Europe (cf. p. 124f of Edmund White's biography of Genet), he made his way into Nazi Germany. When there, he wrote, "I'd wanted to steal. A strange force held me back." What was the strange force? The weird revelation that Germany was "already outside the law," that is, that in Germany crime was institutionalized, the very spirit of Nazism. "It's a nation of thieves,"  Genet said. "If I steal here I will not be performing a singular action that can better realize my nature: I'll be obeying the normal order of things. I won't be destroying it. I'll commit no evil, I'll disturb nothing. Scandal is impossible. I'll steal in a void."

See that? Because the system there was so corrupt, it made little sense, if Genet wanted to stand out, to be a criminal. But in my case, because I am in America, where decency and justice reign supreme, to commit evil and to create scandal, will be a meaningful act, albeit fictionally. All that to suggest that the American system is actually complimented by thieves, who recognize in it a good environment in which to be bad.

Were I to be in the Ukraine or somewhere where corrupt officials and a general lack of civic virtue prevails, like Genet with the Nazis I'd probably find greater fulfillment in continuing to follow my normal lawful ways or even establish them myself as a reaction. But because the United States is so darned good, I have no recourse, if I want a scandal to result from my choices, but to be evil. And I plan to disturb a lot of people!

Admittedly, I am limited by the efficiency of today's police, as Genet was limited in his criminal enterprise in Central Europe, driving him back to France where the police were crap. And they're no doubt a lot more efficient today than they were in the '30s, with all the greater law enforcement technology they have. It's going to be a bastard, me trying to get away with anything, but I'm going to give it my best shot!
Posted by dbkundalini at 4:09 PM