My Upcoming Life Of Crime 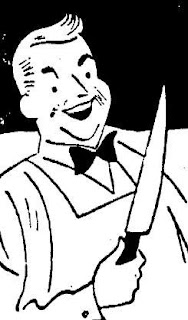 I wanted to give everyone a heads-up on something, a fairly serious issue involving me so no one gets the wrong impression.

I've always tried to keep my reputation pristine, on the blog and in real life. I've never been known to admit to any wrongdoing. If there's ever anything that ever happens, it's always someone else's fault. But that might change -- mostly concerning my reputation -- if people don't understand beforehand what's going on.

Basically what I'm going to do is turn away from blogging my real life (for a while) to blog a pretend, fantasy, fictionalized life. And it might be a few weeks or even a month, I don't know yet. I've sketched out 16 or 17 scenarios, but it's in the actual writing of the thing that it might stretch out a little longer.

In this fictionalized account of my life, I'm going to turn away from decent society, from my reputation, etc., to a life of crime. And, friends, I might be a real scumbag, if that's not too strong a word for it. Certainly the things I'm planning for myself are pretty scandalous to me and my normal social setting. But of course if you're in some country where corruption, deceit, murder, and underhandedness are a way of life -- and I do seem to have a number of readers from the Ukraine -- then it might seem even mild to you.

Did I say murder? Yes, I guess I did. But remember -- and every good fiction writer likes to state these disclaimers right up front -- it's all pretend. In real life I'm not planning on killing anyone. Only in this fictionalized account of my life as a criminal. The one promise I will make is this, that I will strive to justify each killing, to make it clear to you the reader that my various victims deserve what they get. I'm just looking at my scenario (number 9), as an example, and I see the possibility that I will kill off an entire mob from the fly-by-night carpet store racket, and it looks like I will then take money from their wallets and piss on their dead bodies. The justification will probably be something like this, that they sold me crappy carpet and left town.

A lot of my criminal activity will take place in the Skidrow section of town, the most notorious set of bars, restaurants, bail bondsmen, and shady carpet stores in town here. In real life, I was warned about Skidrow so many times, I've only really ever been there in my imagination! And actually that's the way it's going to stay, since this is fiction. I don't know what the real thing is like; it's probably not as bad as I imagine it; I haven't heard of too many murders down there lately; I just know ... the body count will be going up.

Do I actually want to be a criminal? No, not really. I'd rather die of old age in my own bed without an enemy in the world. Not in prison with a tin can for my cup and a bunch of toilets without walls. (I toured a prison once and it scared me straight, even though I had no temptation to deviate.) My real inspiration for this fantasy series is that I'm reading the Edmund White biography of Jean Genet, who thought it was cooler to be a criminal than a normal guy.

So look for that ... right here on my blog. It won't be long before I have "NOTHING TO LIVE FOR," which is the overall name of the project.

Until then, be nice, respect others, do not steal, do not kill, etc., and you'll have a better life!
Posted by dbkundalini at 2:29 PM