The Mystery Of Clouds 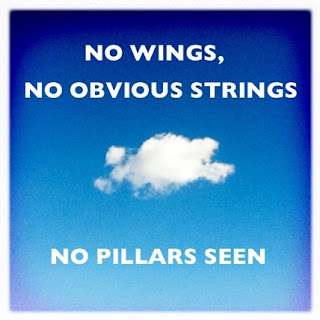 It's been a nice day today -- mid 40s with very few signs of winter. So I spent some time outside, lying on my back, chewing a weed, looking up at the sky. My picture is of an actual cloud passing by. That's not a cloud from Google Images, but a cloud I personally saw and photographed! If you happened to see that very cloud, please let me know, because it'd be cool to have that in common with someone...

While looking up, something amazing suddenly occurred to me, a question, "What keeps them up there?" If it was a flock of geese, they'd be flapping their wings, but I could see no wings and so no flapping. There were no strings or wires attached from above, at least none obvious to me. And certainly there were no pillars raised up from the ground, which would have been immediately noticeable long before today, like years ago. Although what a great picture that'd be, thousands of train cars on tracks going every which way with pillar cars moving the clouds around the country! It'd cost money, for sure, but we'd have to ask, What's a decent cloud worth to you?

It could be, and probably is, that Science has a good answer for how clouds stay in the air. I don't know. If I had to guess, I guess it'd be something to do with them being lighter than air. Then the reason why they're not higher up is they're heavier than the air above them. The lighter air prevents them from going higher and the heavier air keeps them from falling. Something like that. Certainly other heavy and light stuff work together like that. 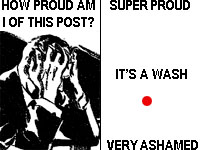 But what makes a cloud heavy or light? This is where we're entering the realm of Mystery. Either no one knows, or it could be just me. I don't know. I'm guessing it has something to do with barometric pressure, whatever that is. An easier answer might just be that a cloud is part of the sky, the sky operates by the rules that appertain to it, so that's it! But that's not really an answer, but begs the question. I thought I knew, but now that I'm writing this I can't think of it.

I'll look at it from a different angle. They say fog is a cloud that's come down. So let's figure out why fog would come down. It'd have to be heavier than air, right? The air above it just suddenly got light, a bunch of moisture came together in isolated places, equaling a cloud that's naturally heavier, so it sinks. Then the sun comes, evaporates the moisture, thus lightening the cloud so it rises or disappears all together. Heavy and light, that's the key to the whole thing.
Posted by dbkundalini at 3:09 PM