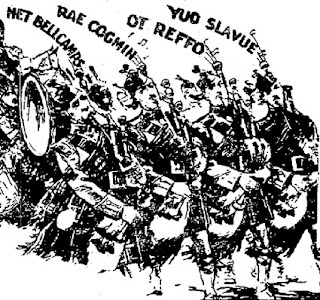 I was downtown tonight, I thought for a pleasant time. But then out of the blue, without any warning, suddenly I heard the sickening sound of bagpipes in the area. Which, had I known that would happen, I never would have left the house. How sickening!

I've never liked the squealing of bagpipes, like most people. It sounds like someone stepping on a cat's tail, if you can imagine a cat's painful squealing in slow motion and very prolonged. Whatever kind of apparatus they've got inside a bagpipe to make such a terrible sound, it is without question something infernal deriving from Hell itself. The instrument puts forth such a putrid sound, it immediately sickens most hearers. I've found that something about it connects in an archetypical way to the gag reflex, and, I don't know, maybe even incontinence or involuntary bowel movements, which might be why the players always wear kilts, for easier evacuation.

I know what everyone's going to say: We try to like bagpipes, we're not up in arms about them, because we want to honor other people's cultures, however foolish they might be. Well, I'm sorry, this is one I've tried to like, but I've found it's impossible. I'd rather have newborn twins crying loudly, one close to one ear and the second close to the other, and spitting up, than be anywhere within a mile of a set of bagpipes. If I could gather up the world's bagpipes -- seriously -- I'd burn them. Although I'll give you this, I would graciously put one of the instruments in a laboratory somewhere, frozen like dangerous viruses, so mankind would always have one sample, however locked away it was, for study by future generations were they to deem it necessary.

OK, I know I'm preaching to the choir, because we all -- most of us, of course excluding sadists and masochists -- hate the bagpipes. And yet -- and this is something I don't fully understand -- people do like the bagpipes on the song "Amazing Grace." Which might be why bagpipe players are always playing it, because they're trying to inspire an actual liking for the instrument, however impossible such an elusive dream has to be.

I would guess the reason people tolerate bagpipes on "Amazing Grace" is because you usually hear it at funerals and other serious commemorations. So it worms its way into people's psyches; they associate it with burying Grandpa and getting their inheritance. So they come to think, however subconsciously, that "Amazing Grace" means easy money. That's actually kind of how it is with me, too. I had a rich uncle. He died. They played "Amazing Grace" on the bagpipes at his funeral. I got an $800 inheritance, which I immediately gave to other anti-bagpipes agitators.

Of course the other side of this coin is the odd fact that "Amazing Grace" is one of our least favorite songs, again speaking for nearly everyone. Because they do play it at everyone's funeral. So it's come to represent death, the fear of death, the stench of death, etc. We want to avoid it at all costs. And if it weren't for the dream of inheritances, we'd rise up and ban both it and the bagpipes.

Frankly, I've never been much of a fan of the song, riches or not. It has the words in it, "That saved a wretch like me." That doesn't do much for my self-image, I don't know about you, but I'm not a wretch. I'm pretty darned good. But in a weird way it fits. If you hear a bagpipe guy playing it, he actually is a wretch! A normal musician would be playing a normal instrument, not this abomination.

So what are we left with? A crap instrument and a crap song, but, amazingly (no pun intended), both are more or less tolerated when they're together! Yet I'll insist on this truth: Get rid of the inheritances -- just try it -- everyone give your estate to charity, and the bagpipes would finally get what they deserve!
Posted by dbkundalini at 8:07 PM