The Next Generation - What Do I Care? 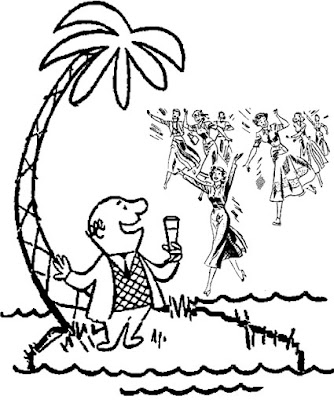 I was out having ice cream. After a while, quite a few other customers were there. Suddenly, I noticed they were all women. I was the only guy. It made me think of what might happen if all the restrictions and mores of civilization were suddenly removed, like if we were all stranded hopelessly on a desert island.

In that case, they'd probably notice me sitting there, instead of being oblivious. As it was, they were having ordinary conversations, unaware of my presence. But on a desert island, and as the situation became obviously hopeless, they might have different ideas. Such as what I might have to offer, in addition to building huts and keeping down weeds.

In this scenario, they'd have a big women's council, trying to pressure me into bringing satisfaction to them, which I would resist with everything in me. And it's not like there was anything wrong with them. There were a few younger than me, like 35-45. They didn't look too bad. I saw some tight jeans and hips adequate to any task. There were a couple high school girls, probably underage, depending on what jurisdiction the island was in. I wouldn't touch them.

But still, I don't want the pressure that goes with being the only guy. In desperation, suddenly, they're trying to force me, making me flee to a remote part of the island. I'm hiding out in the trees, in a cave, etc., and not wanting to make a sound lest they hear me. Finally, a few of them get ahold of me and I'm strung up on a stick, hands and feet, being carried upside down back to the council headquarters, around a raging bonfire. They take me into a hut, manned by their queen, who tries to reason with me: "We are going to need to raise up the next generation. We're looking to you to father children who will keep our lines going."

My obvious protest is that we are on an island, we are not the only people in the world. There's no reason for us to worry about the next generation. But she makes a good point, that the legacy of some of these ladies is right here. Maybe they want to have kids. And maybe they want to pass on a heritage to them, how Fate brought us to this island to learn lessons and pass on a heritage.

But I'm very blunt: "The next generation? What do I care? I've never cared about the next generation!" So I resist the best I can, but I have to say, forgetting about the next generation, a little human companionship might do me some good. I've got my eyes on those tight jeans. She's standing in one spot, reaching over to the left to get something. The right leg comes up off the ground. I'm sitting on a bench, getting an eyeful. Is it by accident or design? Nothing happens on this beach by accident, I decide. It's all meant as a seduction, and it's only by the greatest willpower that I don't take her right then and there!

I try to retreat to the other side of the island again. Perhaps I can spell out SOS on the one of the beaches with coconuts. But I look up -- it's been 10 years and they're all very desperate -- and here they come, waving machetes. Making it clear that I'm either going to submit or they'll extract what they need with the machetes, raising up children by hook or crook.

In the end, I have no choice but to relax and everything gives way. All my objections melt in the first rush of release. Next thing I know -- and I would've never guessed it -- they're lined up outside my hut morning, noon, and night, wearing me out like crazy. The years pass. I now have a number of grown sons to handle the heavy lifting with the ladies. Obviously, inbreeding is a concern, but what do I care? I've never cared about the next generation...

Then, at long last, I have all the time to do what I want. I sit and look at the ocean and hope someday they'll rescue us. At least me. I'll leave the next generation behind.
Posted by dbkundalini at 7:17 PM