I've been saying for quite a while that "Tabasco sauce is nature's most perfect food." Most recently, just this morning, I said it again while out for breakfast. I love it on eggs.

I love it on several things, tacos and pork chops being the biggies that come to mind.

I've never drunk it straight from the bottle, which we were talking about at breakfast. But I have put it on my finger or palm and enjoyed a bit of raw sauce like that.

Tabasco's never done me any harm, except once, when I got it up my nasal passages, documented at this link. I even have pictures of myself in the minutes after it happened, showing me with a really weird look, but I can't post those now or ever.

The rest of my Tabasco experiences have all been good. Except it seems more recently that when my tongue gets hot with it that it's really hot. Which I still love, so I guess that's not a negative thing. 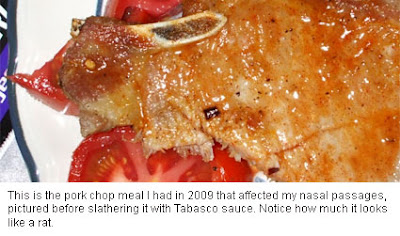 OK, the idea came up today, what if a guy drank a whole bottle of Tabasco sauce everyday? And my thought was, since it's nature's most perfect food, that there might be an interesting effect on your body. Such as perhaps giving you incredible longevity, if you mixed in a little faith and the power of positive thinking. It might be like the old Russians who eat yogurt and live to be 135. Or the old guys who drink a shot of whiskey everyday and live to be 110.

I suggested you might go way beyond the yogurt and whiskey guys by decades or even centuries. Like me. I'm 58 now, but I might've died when I was 28 if it hadn't been for a fairly moderate consumption of Tabasco. Because I'm picturing it down there keeping my stomach and other organs protected, killing whatever might need killed.


The other day I looked in the mirror and my face was actually red. So that's some weird corpuscle action going on.

I have the theory that Tabasco sauce is good for you. That it kills something. You know, whatever. I'm not a doctor. Just a theorist.

I'm still "just a theorist." All I know is I've been alive and haven't died yet, and I attribute most of that to Tabasco, along with a very cautious nature.

I'm not giving links to these old posts, too lazy. But I had another post on this, also in 2009:

I have a theory, no actual research involved, that Tabasco could probably cure disease. Big stuff too, like herpes, cancer, all that stuff that supposedly can't be defeated. My theory: sprinkle some Tabasco on it and the bacteria will have to die.

I'm very used to Tabasco sauce. I started out having a tiny drop once in a while at my grandparents. Back then we must have stretched out a bottle for years. I don't know. Now I slather stuff with it, both on top and for dipping. But no matter how "used" to it I am, it still has heat that does things to me. Sometimes my hearing gets slightly fuzzy, my nose runs, I'm drinking water.

Because it has these dreadful effects ... that's where I get the idea it can cure disease.

I also used to have a theory that those metal Chinese balls with different gongs in them could cure foot pain, so obviously my theories rely on a lot of wishful thinking.

Notice all the physiological effects Tabasco causes. It's great stuff. But once again I concluded by saying I'm a theorist with "wishful thinking."

But let's say I'm right. And let's say I actually were to drink a whole bottle a day. I'm 58. Then someday I'd be 158 and still going strong. All my non-Tabasco-drinking friends and family members would have died, and there I'd still be, probably not a friend in the world. Or maybe I'd have lots of friends. Because who wouldn't want to be friends with a 158-year-old guy?

The Tabasco might even help me maintain my virility, so I'd be able to attract even 20-year-olds -- ladies and guys. I'd say, "Hey, they're legal, even if I'm old enough to know better!" Actually, I might say, "You all look cute. And I wouldn't mind doing you, but I can't respect anyone who'd date a 158-year-old man. You have to be crazy ... or a gold digger, and in my case, thanks to Tabasco, I'm not going to die, so you'll be with me forever. Poor you."

What I'd really like to have is someone my old age. Even a mate 90-years-old would be too young. I'd either be robbing the cradle or the undertaker. Depending on their Tabasco habits.

The only thing that would kill me is if the McIlhenny Company stopped making Tabasco. Although if I got wind of that, I'd stock my basement with about 400 years worth, or more! However long I felt like living at the time.
Posted by dbkundalini at 3:33 PM