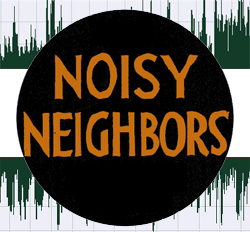 I was driving through town today and was interested to see that a particular church had moved out of their spot.

I have a friend who works in the same building, and he's told me a thing or two about the church, in short, that they're noisy neighbors. But since there's no limits to religious liberty, more or less, no one's been able to quiet them.

It reminds me of one time I visited a church with a friend of mine when I was a kid, and the preacher called on the congregation to make a lot of noise, so the folks of the neighborhood would know they were there. Back then there was no air conditioning, so the windows were open, and he thought that would be a good testimony. "Let's let them hear us way down the block!"

The church in question in this office building isn't the same kind of place. They keep their windows closed to keep in the cool air in the summer and heat in the winter. But up till they left they were still very noisy.

So here's the set-up. We've got a three story building. On the first floor is an office supply store along with some private offices. The store is where my friend works. On the third floor is something else; I can't think of what it is exactly, except people were definitely there when church was in session. And on the second floor was the church. They rented space, got it started, and now, presumably having built up a healthy-sized congregation, they've moved on.

The nature of the church. It's not one of your standard denominations. But some kind of church -- involving foreign practices -- that tends to make a lot of noise. If you're below them, of course it's worse than if you're above them, but neither one, reportedly, was all that great. For the folks below, there was jumping, tromping, stomping, and even pounding on the floor. For the folks above, there was actual touching, whacking on the ceiling, along with a few shouts. And even the murmuring of prayers, if you get enough people doing it, creates a disturbance. I probably don't have to note the obvious, that their heads and consequently their mouths were closer to the ceiling than the floor, meaning the folks on the third floor could easily be disturbed by the noise.

I was reluctant to say this. I was going to leave out this one little detail. But I also visited this church one time. Don't ask me why. But I actually did. One day I was looking for a place to park, like a getaway spot to spend a little time. I think I was drinking coffee. And I happened to pull in their parking lot. It was a Sunday. I saw their sign. And I thought, Why not? even though I don't like the discomfort of visiting any church the first time. But at this particular church, not one of your standard churches, they pretty much left me alone. All except for one very nice lady -- maybe they're called sisters -- who explained to me about the wall hangings and whatnot. I asked her about their doctrine and she was kind enough to fill me in. Then the service started, and I can attest that the bowing and scraping and calling out, with an increasing noise level, were real, then the reaching up to the ceiling, etc.

Now that they're gone -- and I'm not sure where they went -- those above and those below will be happy, no more noise. But what if? And I'm not saying I have any inside information, what if they get an even noisier neighbor than the church was? Like another church that's even noisier. Then, one can't help believing, they'd be wishing they had the original church back, however noisy it was!
Posted by dbkundalini at 10:23 AM