Criminals And The Finger Of Suspicion 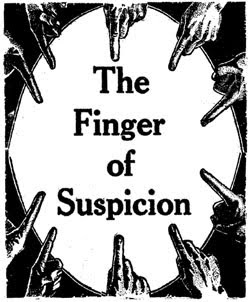 I've been thinking a lot lately about crime.

I'm not myself a criminal, knowingly or actively. If I were, I wouldn't be writing about it, because I firmly believe the first rule of being a good criminal is to keep your mouth shut. But I do tend to think like a criminal, or how I imagine a criminal would think, since I used to think that if the Soviet Union ever took over the United States I would probably be part of the patriotic, though criminal, resistance. So I'm forever thinking, If this were Soviet-occupied America, how would I misbehave? It might be time to quit thinking like that except I have little actual control over what I think.

The biggest difference between now and when I first started thinking that way back in the '60s, other than there no longer being a Soviet Union, is the increase in surveillance technology. Back then a kid could easily imagine himself in a successful, ongoing resistance movement. I was very stealthy in my comings and goings. I was like a magician in my ability to divert people's attention and do all kinds of underhanded things while they were watching. But with surveillance technology being so much improved now, all they'd have to do is check the video and you're busted.

It seems like we used to talk about these things, too, me and other kids, unless it's just a dream I had. We would sabotage everything the Soviets were trying to do to us. And they'd never catch us, that's how good we'd be. But, alas, not now, with video and DNA, etc., the two biggest killers of anonymity. All they had back then was fingerprints. or turncoat eyewitnesses.

But what I'm thinking about today is crime pure and simple. How hard it is to be a criminal, or how hard it should be if everything's working. I've been reading the crime news in the paper. And it's astounding to me how many people persist in criminal activity, even though they're about guaranteed to be nailed these days. Yet, there they are. A few days ago it was this: A party of guys, four or five, went to the apartment of four other guys. One member of the visiting party was an acquaintance of one of the guys at the apartment. But still, even with this acquaintance, he (and they) robbed them and made their getaway. Is that dumb or what? Before morning they had one of the guys in custody, and I wouldn't want to be the other guys for anything! If you're going to be a criminal, dumb ass, there can't be anyone there who knows you!

I seriously think I would make a pretty good detective. Because I'm always thinking, "If the Soviets were here, etc., what kind of trail would I be leaving if I did this-or-that job?" And I frankly can't come up with the perfect crime! Because I'm running it through my mind, A B C, how they'd catch me. It's not just video at the crime scene; it's video at every point along the way, how they could easily trail you no matter where you went. Beyond that, of course, there's DNA. You drop a hair follicle and you're done for. And I'm taking into account hairnets, shaving my head, a complete body shave! You shave and there's bound to be at least one hair left on your clothes...

OK, if it were a matter of national security, sabotaging the Soviets, it'd be a small price to pay to give your life for the country. But to give your life to rob someone at their apartment when they know you? Not near as lofty!

But there are criminals who are a lot more cagey. Like guys who come from out of state, rob a bank, then immediately go to a different state. They've got the advantage of no one knowing them, and they're going where no one knows them. But they're still up against the same thing. The Soviets, or in this case the proper American authorities, have ways of dealing with them. Cameras, the ability to phone ahead to other police departments, profiling, and other forensic resources. Footprints, tire prints, torn jacket on barbed wire. It's not a good way to make a living! Let's say you get $50,000. Big damned deal! $50,000 is peanuts. If you go to prison for 20 years, you traded freedom for 2,500 bucks a year. You can easily find a job, even in today's tough job market, that would pay more than that. Crime is idiocy.

Posted by dbkundalini at 1:59 PM