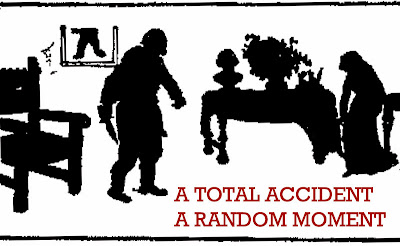 His wife was having a hard time slicing a ham sandwich. The blade seemed a bit dull, prompting the man to comment on it. She made a motion toward him to show how sharp the knife was, apparently joking, then immediately pulled back. As luck would have it.

He reached over, thanking his lucky stars for his life and health, and took the knife and stabbed her to death, the love of his life. That was all she wrote, as the saying has it. She slumped to the floor, a tangled mess of body stuff, without life, her lifeblood there, the whole scene.

An investigation revealed the truth, that it was a matter of confusion, not the fulfilling of a premeditated plan. Sometimes you just act on instinct, kill or be killed. And the only time he would end up serving would be a life sentence, not confined but alone at home, wondering how things might've been different. How can ham sliced so thin be so damned hard to cut? It seems to toughen up when fried.

They were all gathered at the funeral, her relatives and his. Just like their wedding, each side of the chapel hosted the respective sides of the family. But now he was all alone, released on his own recognizance but wisely keeping a low profile until he had to appear.

The casket was in place, the flowers primped and fluffed, the cards of remembrance in their little basket. There was a kind of hush in the place, the pall of sadness more than you could easily bear. The husband was the last one to enter, escorted to his front row seat by an understanding daughter.

He stood up to eulogize the dearly departed. He thanked everyone for coming to pay tribute to the love of his life. Then he touched on his sadness how she had "jokingly" came at him that way with the knife. He knew she was smiling, but perhaps something more maniacal lay behind it. In short, he didn't think, he acted, like you'd act if a wild beast lunged at you.

He paused for a long time, choking back tears. And concluded with a barely audible, "Love conquers all," before he was escorted away, lost in loud sobbing.
Posted by dbkundalini at 12:32 PM