The Weal and Woe of the Misfortunate 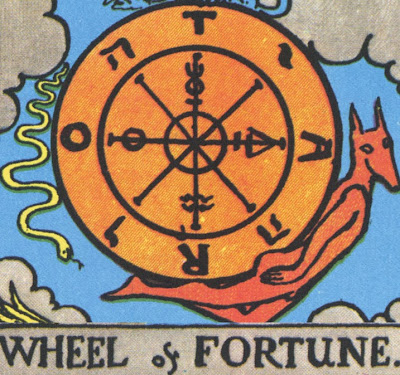 If you happened to see "Wheel of Fortune" last night, you saw a heartbreaker. Oh! how terrible!

The contestant in question was a deputy sheriff named Syeeta, who managed to accrue over $19,000 before attempting to solve the puzzle. The puzzle was this: HOGWARTS SCHOOL OF WITCHCRAFT AND WIZARDRY. Syetta had enough letters that the solution was obvious.

She seemed tentative as she launched out on solving it. Getting everything but WIZARDRY right. I thought she said WIZARDY without the R. My companion thought she simply said WIZARD. Whichever she said, the final R of the word was already revealed. So if I'm right, she mispronounced the final syllable, more likely. And if my companion is right, she stopped a little early. Either way, she lost.

That's a sure $19,000+ down the drain, simply gone. How horrible would that be?! Ghastly. I don't think I'd even be able to watch my episode later at home, knowing that happened. For most of us it takes a lot of time and effort to get $19,000+. Then to see it just [POOF] right out of our grasp would be too much. I felt sick for her.

But for me, the cherry on top was Pat Sajak at the end of the show wishing her well, saying he hoped it was "a good experience" for her! Think of everything you could say to that. "Yes, it was a fantastic experience ... seeing $19,000 go down the toilet ... I only wish it happened everyday!"

I got some laughs from my companion when I was kicking my leg up in the air. "Yes, I love kicking myself in the ass so much! It's such 'a great experience' for me! Great experience?!" And there I go chasing Pat Sajak around the studio. Vanna would have to step in and be the temporary host the last few minutes.
Posted by dbkundalini at 9:57 AM