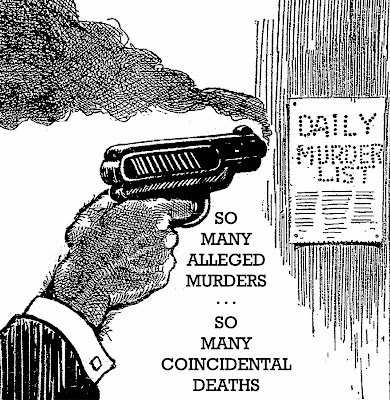 I've always believed in coincidences. Even though I've had plenty of friends who've said there's no such thing. Which is a coincidence, because I knew they were going to say that.

Because coincidence is a real thing, right there's your defense against a murder charge. My topic for the day.

I was just reading the murder news in the paper, and realized these are the guys who get all the press, all the great attention. We pay more attention to the aftermath of an apparent murder than anything else. A guy supposedly kills his wife because she's in terrible health, a guy supposedly snaps and kills his four friends and an infant, or a guy supposedly commits mass murder in a bus station, airport, theater, mall, church, school, grocery store, parade, or anywhere else people gather in numbers above 10, and that's all we can think of.

With the supposed murder comes the long hard slog through the legal system, because, and I support this, even if a million people saw him do it, he only "allegedly" did it. I'm actually a stickler for this. Even as a kid I liked that sense of innocence before declaring him guilty. Even if he shot at me and I saw the bullet coming through the air straight between my eyes, my last thought would be, "He's only allegedly doing that to me. There could be all kinds of extenuating circumstances. Maybe he didn't mean to shoot. It could be a weird trigger. Maybe he was cleaning the gun. Maybe he saw Sasquatch behind me and missed. Or it's a simple case of temporary insanity." Then after death, if I had the power to think one more thought, it'd be, "Maybe I died just before the bullet hit me, therefore exonerating the guy from murder, with the charge being at most desecration of a corpse."

So there you are, the alleged murderer, with the only friend you have in the world, your public defender, suggesting that it was a matter of "Good Timin'" that your supposed victims all dropped dead. It was a coincidence, each person beating the bullet by a fraction of a second, thereby exonerating you completely ... or, again, reducing your charge to the desecration of one or many corpses.
Posted by dbkundalini at 10:47 AM