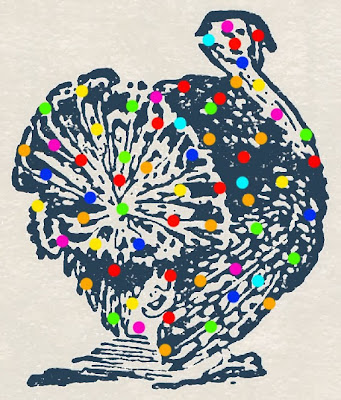 It's been a great Thanksgiving so far. I just got up from a long nap after eating the big traditional meal. And now all that's left is to drive around town and see the Thanksgiving lights.

That's a lot of fun -- even though I don't personally decorate for it -- the way the neighbors and folks around town go all out, their houses decked out in lights, lawn ornaments, and the whole bit. They really get into it, outdoing one another if possible, with displays that are very elaborate.

Of course we have the poorer side of town, where they're lucky to have a small lit turkey. Those aren't really much fun, although I guess everyone has to start somewhere. You never know, you might hit the lottery and be able to step up your game. Certainly everyone's trying to hit it, those with an extra dollar every now and then. One family I know of has a little lame son, and that's his dream, to win the big prize, hopefully then to get his leg fixed, but more importantly to be able to get into the Thanksgiving spirit with the best of them. Until then, he and the others just stumble along.

My own neighborhood is between that and the others. We're not too poor but neither are we rolling in it. The decorations are nothing to get excited about but neither are they anything to be overly ashamed of. Any lame kids we happen to have are more or less secure, and more or less proud of what their family puts out. A decent medium-sized turkey, strings on the trees, an inflatable pilgrim, etc., they're doing OK.

Frankly, I like driving around neighborhoods like mine. I don't get angst pains, as you can readily imagine a sensitive guy like me gets when I know people want to do better but are frustrated and stumbling along. After all, it's meant to be a fun thing, not frustrating. Although I'm just as quick to throw out a word of encouragement: No matter how poor you are, there's always someone somewhere worse off. So be encouraged! However, and this is equally as important, you need to do your best, because they might catch up and leave you behind.

Then there's the real fun, the culmination of the whole thing, getting over to the rich side of town. Where they've got enormous turkeys, and every color of the rainbow for lights, and elaborate pilgrim scenes with moving parts. It's great, with the only downside being the traffic. The folks over there are playing for the crowds. And that really takes some effort, with a couple of families even putting out a short-range radio signal for passersby to hear the story of Thanksgiving and their good wishes.

With money comes great responsibility. Your town depends on you for the good stuff. And obviously some of them get an early start, probably sketching out their display as early as July, and getting the stuff up anytime throughout October. As for their lame kids, if they have any, they're waving from the windows, beaming with great pride, happy as clams.
Posted by dbkundalini at 5:34 PM