I Raised My Own Thanksgiving Turkey 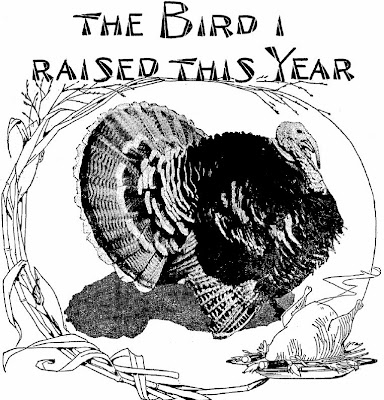 I did something a little different this year. I was with a friend at a farm sale and bought a baby turkey, just the cutest little thing, not nearly as big as a full grown bird. The idea, of course, was that I would raise it for my Thanksgiving meal.

After I got it, then, I realized there was lots of stuff I needed, actually making my meal this year more expensive than if I'd simply gone to the store. You need a good cage, a bunch of feed, fresh water, etc., right down to shots and an occasional visit to the vet.

Anyway, I don't want to dwell on the downside. Because having a baby turkey is actually a lot of fun. A rewarding experience. I had a good time petting his little feathers when he was young. And I named him, Sammy. My little Sammy! But he wasn't little for long. Sammy got some real girth on his bones, a good display of white meat and dark, all covered with some pretty cool feathers. One of which is going in my scrapbook. That is my vow.

Most of you might recall this wasn't exactly a great year for me. My mom died in August. And there were a couple days around that time when I didn't have a single friend in the world to share my feelings with. Except Sammy. Who patiently listened to me, and even seemed to reach out a drumstick as a gesture of comfort. It was about that time that I gave him a middle name, calling him Sammy Dale, and even sang him to sleep a few times: "Go to your sleep, O Sammy Dale..." Thinking about it now still makes me emotional.

But, you know how it goes, time stops for no man. Thanksgiving has been drawing near for the last month, and there's been no stopping it, no matter what. Sammy Dale was raised for this purpose, and so he couldn't be spared, no matter how much anguish it caused me to lift that damned hatchet and bring it down. One thing I was careful to do was to make it swift and sure. No rust on the blade, the thing completely sharp, nothing that would cause suffering and prolong it.

That was all yesterday, Tuesday, because I wanted it to be far enough in advance of Thursday to get rid of the emotions, allowing me to detach as much as I could from the bond we shared.

So tomorrow, then, Thanksgiving Day, it will be into the oven with what's-his-name, and he will be a beautiful spread of meat on my table. Carving him will be an experience, I hope not too sad. Because of course he's already passed on. There's no time for regrets when it's too late to go back. And honestly, he isn't really any different than any other turkey I might've gotten at the store.

Plus -- and I know you'll think this is pretty cool -- I will have one extra thing to be thankful for this year, that we had that quality time through the year. I bet most of the birds at the store didn't have that luxury.
Posted by dbkundalini at 11:15 AM