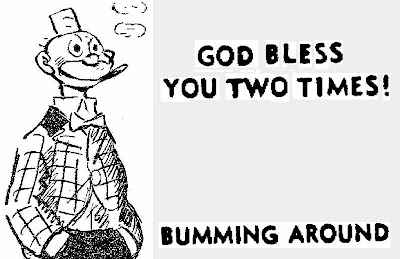 I had the "pleasure" of passing a begging bum today and getting the dreaded "God bless you" with my refusal to part with my "change." (He wanted "change," presumably prepared to turn down bills.) I actually didn't have any change, since carrying money went out when the debit card came in, but that was no business of his.

This idiot wasn't the average beggar, not having a vacant look or the apparent patience of Job. He appeared competent and able-bodied. I might've given him $5,000 if I could trade places with him in terms of youth and health. Here I am on my last legs, but still able to get around without help.

The guy was spread out on a bench downtown, sitting there, hands up, arms spread on the back of the bench, looking as comfortable as can be. He might've been sitting on a white sand beach with a six pack of Coronas, he was that comfortable. "Excuse me, sir," he says, "Could you spare some change?" or words to that effect. I kept passing and said no and looked back at him, to which he called out, "God bless you!" I replied, "I don't do that." To which he replied, "Well, I do! So God bless you two times!" Meaning, he thought I was saying something against religion and God and not saying "I don't do that," i.e., giving to people on the street.

Another guy walking along the sidewalk, close to me, said to me, "They learn that in beggar's school," the "God bless you" crap. I said that I knew that to be true, recalling another guy telling everyone, "Jesus loves you."

I am not anti-religion or anti-God or anything. I go to church regularly and read my Bible and holy books daily and do my little meditations. Hell, I was in the dentist chair just today, saying my prayers. So for this idiot to think his little passive-aggressive "God bless you" was going to really push my buttons in some sort of affirming way was a bad thought. Again, just like me at the dentist, I know the drill.

Instead, it gave me something to laugh about and gesticulate about on the way back to the car with my companion. "I'm young and able-bodied and yet seemingly unable to do anything but sit comfortably on the bench downtown and beg for change!" And "God bless" people with one tone when they give change and another tone when they don't! Yes, I'm quite the sidewalk theologian, yet likely having no conception of what I'm even saying when I say that.

The other guy was right, beggar's school covers this base very well ... for anyone out there who might be easily fooled.
Posted by dbkundalini at 2:06 PM