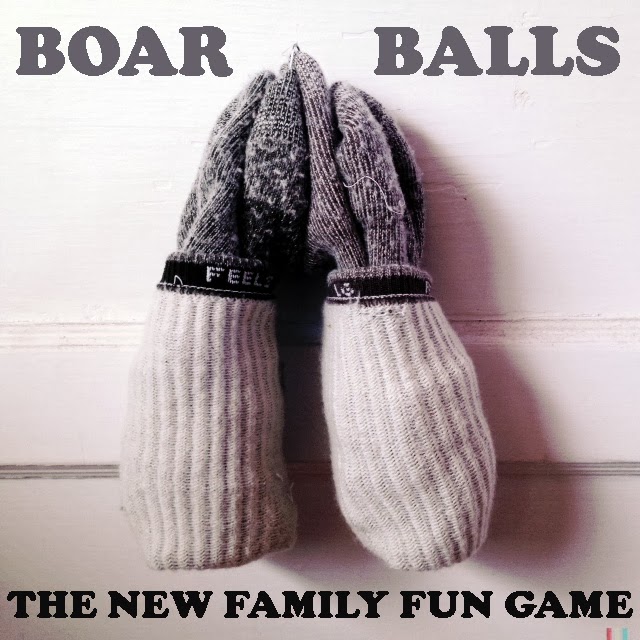 Here's a game I came up with because I had to come up with something! And you know what? It turned out to be a real hit! All the kids, my nieces and nephews, have been to the State Fair -- it's a family tradition -- so they know all about the horrendously large balls on the "Biggest Boar."

Every year farmers compete to bring in the biggest boar. They must feed them like crazy through the year, because they're the biggest things you've ever seen. They're so big, in fact, that you never see them stand up. Whether they could stand up, I suppose they could. But it's always so hot, it looks like they prefer to just lie there, their balls hanging out, exposed to a terrible swarm of flies. The two biggest boars are one of the main attractions at the fair.

Now, about the game. It came about because of a little serendipity. By that I mean, I have very sweaty feet, the weirdest, sweatiest feet you've ever seen. It happens like this: My feet feel like they're ice cold, while all this time they're sweating, making them even icier and colder. Consequently, if you see me walking around, I always have like three or four pair of fresh socks in my pockets. My pockets bulge out like a hamster's cheeks. It's quite a sight to see.

OK, next, it just so happened I was at the home of my nieces and nephews, and their kids, since some of them are getting older. This was at a birthday celebration for one of them. And some of them were looking curiously at my jacket, all bulging out, like maybe I was growing love handles. I was too embarrassed to tell them about my foot problems. So I thought quick and pulled out the socks so they could see it was all quite harmless. I said it was a game! But what?

Well, as these things go, one thing led to another. And next thing you knew, I had invented the game of Boar Balls. Which goes something like this: You have two teams. Each team has an IT. It is the teams' task, starting off about 12 feet away from the other team's IT, to ask questions of the other team. With a right answer, team 1 stays in place. With a wrong answer, team 1 advances one foot toward team 2's IT. Then, of course, the first team to get their IT smacked in the face with Boar Balls loses.

We've found you can make it a lot funner the grosser you are. Such as "Those are really sweaty ones coming!" Or "The flies are everywhere, swarming around!" And "How funky, very funky, those balls are!" You can picture how it goes: IT doesn't want to be smacked, because they're busy picturing in their mind an actual boar backing toward them. Which, if that really happened, it would be very gross and painful.

The day I made up the game I just happened to have 500 questions on small cards relating to true facts about hogs. Such as, "True or False, the boar is a male." I know, that sounds really easy, but some of these kids, with our educational system today, and their addiction to video games, don't really know what male and female even mean. Then there's questions that kids simply don't know because they're more agricultural whereas the kids are urban. Such as, "With the hog, it's a well-known expression that they're able to use everything but the __BLANK__." None of the kids knew this, again, probably a result of their addiction to video games and their lack of exposure to this fact. The answer is "The squeal." I also wrote in some gimmes, such as, "True or False, a groundhog is the same as a farm hog." That's false. The groundhog is different from a farm hog, the main difference its much smaller balls. 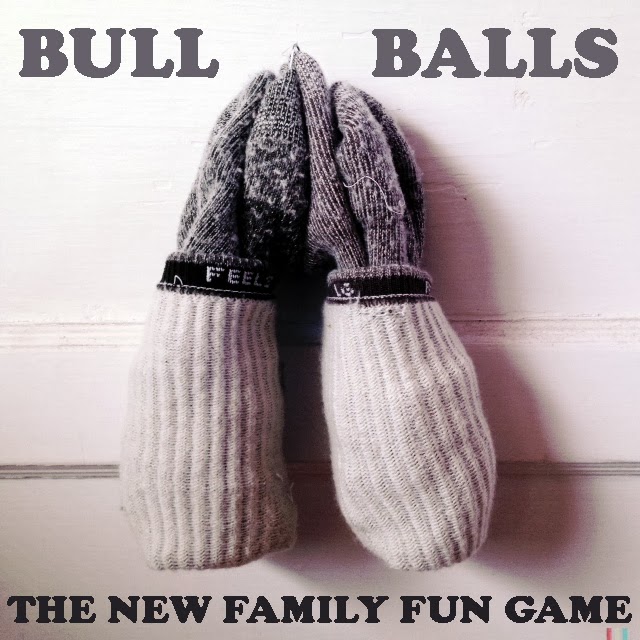 Since it's "The New Family Fun Game," naturally I'm sensitive that all families are not alike. There are some -- I'm thinking of our Jewish and Muslim friends -- who won't have anything to do with pork. For them, I recommend the same game, while calling it "Bull Balls." I've also written 500 questions on the big beefers.

My own family being at least nominally Christian, and not having any sensitivity about Boars vs. Beef -- frankly, we eat both, often together -- stick to the Boar version. Unless, and this is important, unless we've already memorized the Boar answers and need some variety, at which point we switch to the Bull questions.

No matter how you play it, it's both dreadful and yet kind of fun to picture that massive animal backing your direction, if you're IT, and having those huge balls smacking you solid in the face. As for me, even though I'm the guy that came up with the game, my imagination's working overtime and I don't want those huge balls in my face either! Crazy but true.
Posted by dbkundalini at 4:32 PM