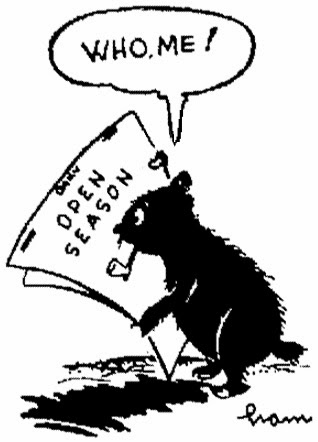 In case you've been wondering where I am, I'm back! It's just now early afternoon here, Feb. 2, Groundhog Day. And I've been out doing what you do on G.D., which is groundhog hunting. It's a big thing here. My family and I have been blasting groundhogs for many years ... and (not to get too morose after such a joyous day) I'm probably the end of the line for this side of the Slump family. After me ... who knows?

Anyway, it's still a lot of fun -- no doubt bringing joy to my ancestors in Heaven -- if you can stand the hours and the cold, which of course I can. I went to bed way early and was up in plenty of time to stake out the holes. Me and some other guys from town. It's on a parcel of ground my aunt owns south of town, a hill we actually call Groundhog Hill. We've been calling it that since 1965, when my aunt and uncle (he's now dead) and cousins moved there. Groundhogs were swarming it then as now...

Just a sidebar to that: The groundhogs were thinned almost to nothing around 1968, thanks to the relentless hunting one of my cousins did back then. Except for a few, I guess, burrowed deep in the bowels of the earth, there wasn't a living thing on that property, nothing but us. Birds rerouted all flights, it was that bad. It wasn't till my cousin married and moved that wildlife made tentative forays back. It looks now like the natural balance is restored. But we still love to get the groundhogs on this Day of Days!

OK, so there we were, way before dark, enduring the darkness and cold. My fingers were getting cold even through my gloves. There was one dramatic moment when I had to take my gloves off and simply blow hot breath on them. I mention that not so much to be bragging of my resourcefulness -- how would I know it'd even work? -- but to pay tribute to my dedication to the annual hunt. Few are more dedicated than I, and of course I pay tribute to the others as well...

Now, when do groundhogs come out? As you may guess, they wait till the crack of dawn. The sun rises literally just inches over the horizon and the first few come out. We let them sit a while and get secure. Then a few more come out, a little better. It's right at the end, then, that the fattest old grandpa pops out. He's more suspicious, sniffing the air for hunters. But being older and apparently having lost the power of smell, he doesn't notice us till it's too late. POW POW POW CRICH POW, that CRICH being one guy's gun jamming.

Picture the scene: Old grandpa, the fattest one is blasted back, eight feet from the hole. Even if he might hope to fall back in the hole and die in dignity, it's too far now. The others are massacred. Only one made it back in, so it was nice that we gave them a sporting chance. We were very happy! The only guy pissed off was the CRICH guy, one of my cousin Roto's grandsons.

I got a big whiff of the gunpowder smell, instantly taking me back to the glory days of my childhood, watching my own grandpa chuckling over a victorious hunt. What memories! I only wish I wasn't the end of the line. I should've married and had kids, if for no other reason than to keep our Groundhog Day traditions alive.
Posted by dbkundalini at 1:31 PM