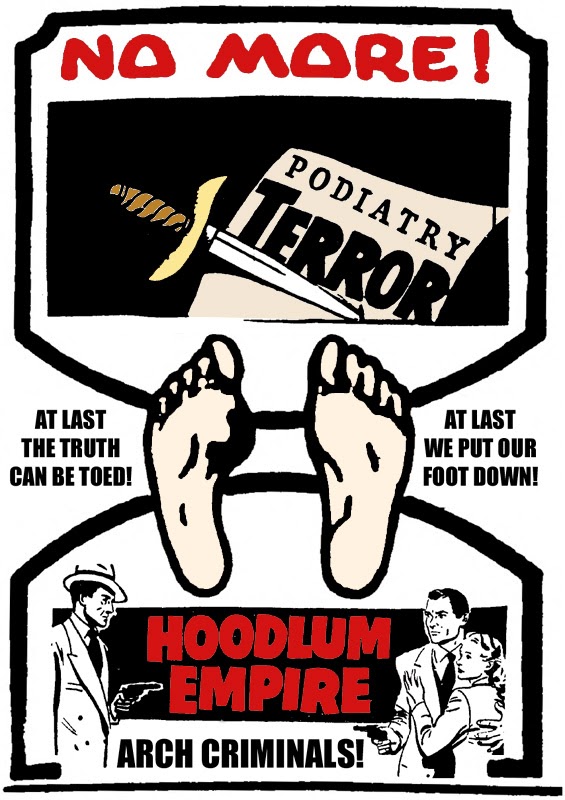 Some time back, after hearing of so many terrible goings-on, I decided at long last to put my foot down and seek information on the shady trade known as podiatry and the heels that do it. I've taken certain steps in that direction and I'm prepared to give at least a preliminary report.

So far it's just me doing the work. But I'm hoping that by getting the word out I can put together a team. I'm thinking of calling it TAPS, like on the ghost hunting show, but this time with TAPS standing for Those Asshole PodatristS.

I've discovered one very interesting detail of these guys. Podiatrists always marry their receptionist, with the receptionist being the only employee, since she can't be forced to testify against him. That would be a concern if anyone could ever catch these guys. But they tend to set up shop, then disappear in the night. Probably the ideal situation for them, from their point of view, would be to set up in the back of a carpet store! They could all vacate together...

My work so far has been to visit empty office space where podiatrists once were and have now left. I've gone to a few of these places. I've used my natural sensitivity and intuition to communicate with the spirits of departed patients. It's not the case, however, that every one of these patients actually died. But in the agony of their treatment, they all left something of their spirit energy within those unfortunate walls.

Now, being only one man, and without the government's surveillance expertise, I don't know any of the actual patients by name. So as a workaround I play the odds. "Is the aggrieved spirit of Ted here? Calling Ted." Nothing but silence. I went through a list of common names. "Al? Mary? Clyde?" But there was nothing. Silence. Finally I hit on one: "Phoebe?" At that, I suddenly heard rustling, right where the chair had been! Then the telltale fragrance of foot odor hit my nose, and I knew ... Phoebe's in the house!

"Phoebe, I know you suffered heinously here. Flick your big toenail if it was an ingrown toenail ... treated without anesthesia." I was spooked, really taken aback, when she not only flicked it but let out a bloodcurdling yell. "So the pain hasn't lessened at all? Flick it again if that's a yes." I heard the same flick, and an even more bloodcurdling yell. "OK," I said, trying to nail down certain conclusions, "Flick it once more if your podiatrist was a son of a bitch, then flick it a second time if you wish you would've simply suffered with it the rest of your life than to seek out his worthless treatment." I waited as she no doubt pondered whether she could endure the pain. Then, flick, [SCREAM], followed by flick, [SCREAMING BLOODY MURDER].

I poked around the office a bit more. Under some rubble I found a poster of a foot, a cutaway view, with the skin, muscle, and bones on display. You'd think this would've been nothing more than artwork from a supply house. But I'm thinking it might've been a view of an actual patient's foot, possibly operated on in this very office. I called out to Phoebe, who verified for me that it was indeed her foot, this time with three nail flicks and three more bloodcurdling screams, growing in intensity as her pain increased exponentially.

Finally, just to satisfy my curiosity as to how the podiatrist and his wife are able to disappear during raids, I tapped around for a hideout. It didn't take long to find a cut out section of the floor, covered with a removable door. Obviously there had been a switch and wires on the wife's desk to unlock it. Pulling away the boards, I found a room big enough for various provisions and space enough to sleep if need be. Very clever!

But that wasn't all! I let out a scream of my own and nearly threw up when I saw a shelf with actual foot parts, severed toes, bone, curdled muscle, the whole bit! As I screamed, Phoebe's spirit was again with me, herself screaming. As I poked at some of the bits of a bloody toe on the shelf, her screams became deafening. This time I knew! She didn't need to flick her toenail for me to know ... some of this mess was hers!
Posted by dbkundalini at 7:16 PM