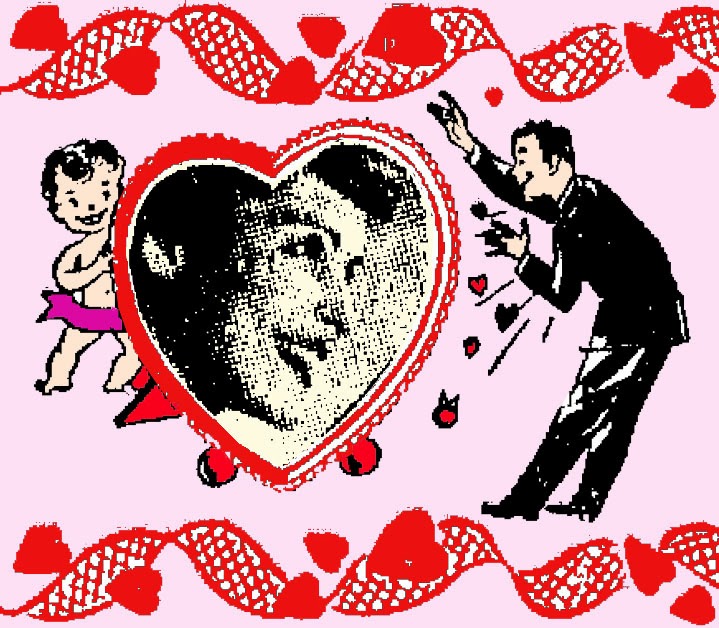 Note: It's Valentine's Day, so we're celebrating LOVE and all the accoutrements that go with it, including, between the lines, a dash of sex. It's great to "couple," however you do it, whether together in the flesh or in some other sense. I've had a few dates lately. She and I went out for our Valentine's Day date last night, to avoid the rush -- the crush of people -- on Valentine's Day itself.

Remember a few weeks ago I said I had a couple dates? Well, guess what: It's true, lightning can strike in the same spot twice! We had another one.

The difference between this date and the others is that we know each other so much better. We have exchanged calls, texts, and Facebook statuses. I'm pretty well up to snuff on her love of funny cat videos and miniature horses. I appreciate the psychology behind liking miniature horses.

This time, again, we came together over dinner, for Valentine's Day. I did the traditional thing, which is paying for her meal. No dutch treat for me. I'm old-fashioned like that. My dad probably did it before he and mom were married, even though, as I understand it, he was something of a pauper.

Later, without getting into too much of the nitty-gritty details, I found myself in a position of resting my head on her chest, just under her chin. By resting my head, I mean sideways, definitely not my face directly buried in her chest. It was a touching moment, right out of the old song, "Sometimes I Feel Like a Motherless Child." Which, after all, I am.

And she seemed comfortable with it. I was comfortable. It gave me a lot to think about, as you can imagine, about proximity and what it could all lead to. Of which, speaking of comfort, I'm not comfortable saying too much.

Then I started thinking, "I can hear her heartbeat." Thumpa-thumpa -- thumpa-thumpa, etc. It really did something to my thought processes, giving me the thought, "Good grief, this is a living other ... blood is flowing ... each cell is being nourished," and other things along those lines.

Then the more I thought the sillier I felt. Of course her heart's beating! There's nothing wrong with that, is there? It's just you don't hear it that often. I kept toying with the idea. She might've thought I was lingering a bit too long, but what could I do, being a motherless child and all? Who knows her secret thoughts, probably something about nurturing and me being clingy?

My silly thoughts went something like this: Hearts beating, hasn't it been done to death? All these years the same thing, we haven't risen above it. Even though they've done marvelous things with artificial hearts, they still haven't got one to sound as lifelike as this, I presume. I keyed in on how regular it was. She wasn't varying much from the same old thumpa-thumpa you think of as the heartbeat's basic stereotype. How exciting is it having me attached to her breasts, in that sideways manner of speaking? Obviously not too exciting... she had the same beat-beat regularity...

Continuing this lovely reverie, I noted to myself, Aren't heartbeats these days almost passé? We've denied so long that we're living things -- not willing to use a bathroom if another human soul is within 50 feet -- both because of the well-known reluctance to pass waste in public as well as the fear of being sexually attacked by truck drivers in the area -- why, at the end of it all, is a heartbeat allowable?

This woman is mortal! I exclaimed with my inner silent voice. Not the goddess I imagined. Someday, although God forbid, her heart will be stilled. And if we proceed down this path, I might be there, whether it's 10 years or 30 years later, when it happens. What will I do? What should I do? CPR? How am I to know if this mortal machine can be repaired either by medicine or mechanic?

I felt my own heartbeat quicken its pace, making me no more innocent than she. When a thought like that hits you -- you know as well as I -- it's a real bastard to shake.
Posted by dbkundalini at 7:27 AM