Proving Someone Is a Duck 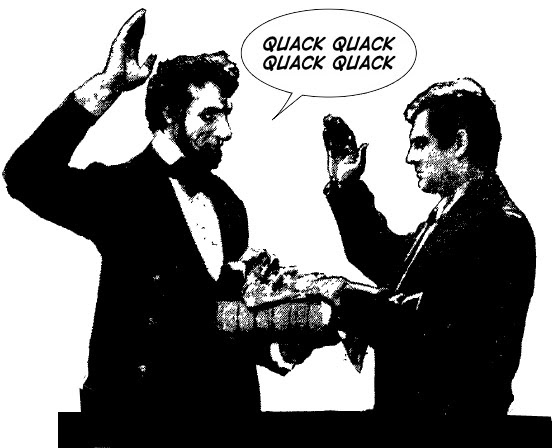 I'm always thinking things are not what they seem. Such as the feeling I sometimes have that we're actually ducks. Some of us.

You can always say "Quack quack" and see how they respond. You might be surprised. If they respond accurately to your quacks, then it definitely looks like, at some level, they're at least showing duck consciousness.

It doesn't take many experiments like this to get the sense that you're on to something. Subject A didn't think I was serious, and that it was all a joke. But I counseled patience, that we were on the verge of something big. "Surely a few more experiments wouldn't overly quacks your patience."

Then as Subject A relaxed, I said, "Quack quack qu--quack." He looked at me, then reached for a tissue and wiped his bill. My theory is the quick hesitation (nasal stutter) in the "qu--quack" told my young duck friend he was about to sneeze if he didn't wipe. I pronounced it a success, the result being exactly what I've seen in other ducks.

As we continued, I noted another finding consistent with mainstream findings on ducks, that they simply won't sit still very long. Subject A was fidgety, wanting to move, wanting to get away from me, maybe even fly south. I gave a stern "Quack!," in no uncertain terms, and pointed with my finger for him to stay seated. And he did, letting me know that ducks understand the imperative tense.

I thought this would be a good time for the "Rapid Fire" round, which normally spooks ducks, coming as it so often does on the first day of hunting season:

Later, making things more official and controlled, I affixed sensors to his scalp. Then came right out and asked him, "Are you a duck?" "No," he insisted. This was consistent with my prior finding that most ducks live in denial. The sensors agreed with me, singeing the feathers on his head and changing his answer to "Yes."
Posted by dbkundalini at 9:07 AM