My Brother's Blog's Getting Great Word of Mouth 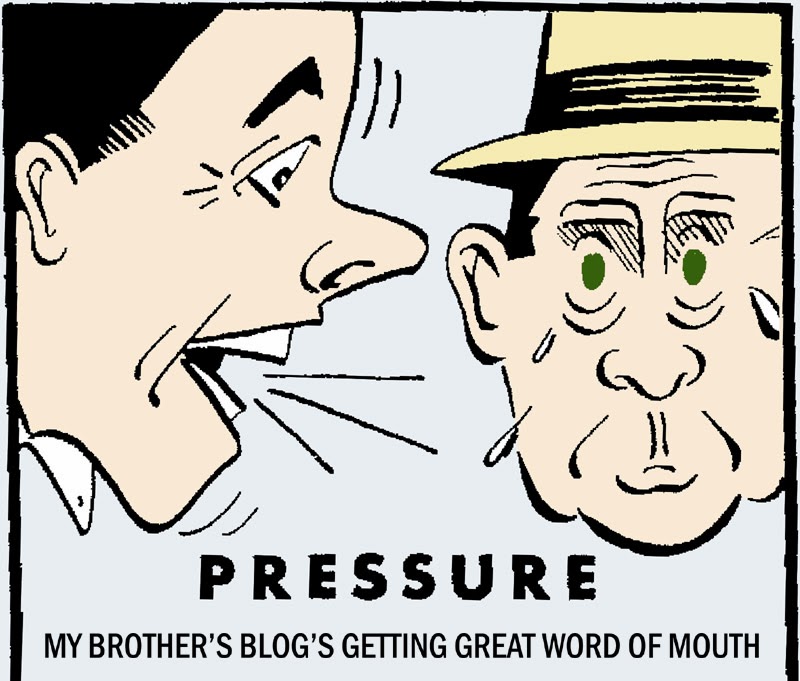 It was just yesterday I asked all of you to help me get more blog traffic than my brother. Just yesterday. But the internet travels at the speed of light, or faster, so since then everything's changed. Instead of his traffic going down and mine going up, I'm looking at a disaster: Everything's just the opposite.

I'm kicking myself, really, for calling attention to him. Although I'm finding some relief in the realization that it was going to happen with or without me. I mentioned that he blogs about some of his business trips overseas, which, amazingly, is exactly what a lot of people want. Which makes sense in some weird, twisted way. Because they're also planning trips abroad and want to know the latest scuttlebutt on travel conditions, personal safety, and who's sleeping with which dictator.

As it so happens, I have never personally been anywhere except the United States. And I don't really even travel here. I'm always trying to save money, or I'm too busy, or the weather's bad, or something. It's always something. I did write the other day about walking to Edwinton and being bitten by a dog, but no one wants to know about that. It's no Gibraltar!

I've got something bitter to say to my "faithful" readers: Thanks for nothing. Although I'm sure there's a few of you who're trying your best. Please forgive me if you weren't here yesterday, if you have a good excuse for your absence. To the rest of you, I can only wish you'd taken my plea a little more seriously. Oh, if only it hadn't been such a huge imposition to help a brother, your fellow man in his time of need. So here I am now, dying. Where's the milk of human kindness? Was it a problem that I called you riffraff?

A helpful family member's been keeping me up to date on my brother's exploits, filling my ear with all kinds of things. For example, the Gibraltar stuff is lighting up the internet. Travelogue bullshit, in my opinion. Not worth the monitor it's printed on. Meaning, for me, that I better come up with something or all is lost.

We used to write "themes" in school on places we'd never been. Africa comes to mind, a land of savages, darkness, dense forests, and an occasional river, mostly well known for its animals, including the giraffe. I'm smarter now, I could probably fill a page like that on any country. They always say to writers -- one of which is me, if you write a thousand words a day, any old crap -- that you'll eventually come up with something worthwhile.

In addition to travel, if I want to beat my brother, I could write about people. People like that. But that's tough for a loner. Although I know about people. I've been ducking them for years, which makes me a real expert. Streisand sings, "People who need people are the luckiest people." I've often disagreed with that in practice, but now that I need people (to help me beat my brother), I need to start mingling.

So, people, permit me to reach out to you. I'm making a gracious exception for this cause. I'm venturing forth. Please don't shame me. I need you! Help me keep up with his hits. Help me keep my brother from winning the blog war. Don't click on his links. Only click on mine, and as often as possible. He will never let me live it down if he wins. Just as I will stick it to him if I win.

Many thoughts are racing in my head on this battle. Most of them are indecipherable. The others are harder to explain.
Posted by dbkundalini at 4:20 PM