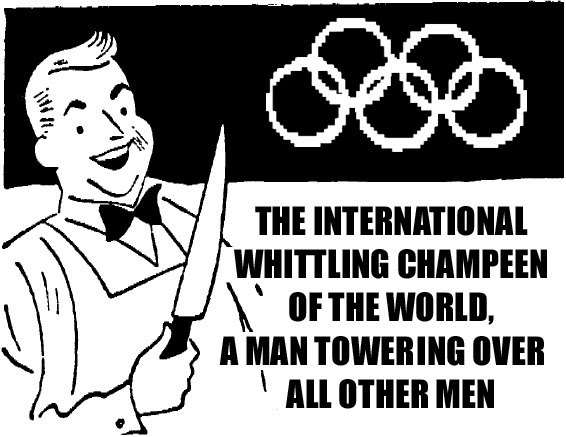 Even to this day, after all these years, I can barely stand to watch the Olympics. It's a very bitter thing to see, although of course I congratulate all the athletes who made it, and especially those few who take medals for being the best in their sport. Just don't ask me to watch it ... at least for very long ... they might eliminate the ski-jump while someone's in midair!

I've probably mentioned all this before; it's one of the defining moments of my life, although, thankfully, it's receding now farther and farther into the past; mercifully, time has passed; there won't be much time left for me to dwell on it, the shame, the heartbreak, the bitter disappointment. Someday, hopefully soon, I'll pass from this dark world, only to dwell on the heights, in the light, with other great champions. On Mt. Olympus, or somewhere better.

If you've been able to forget me and my experiences as an almost-ran Olympian, then, frankly, I can only envy you; it's something I've never been able to put behind me. I still see them whispering at the grocery store: "There's the guy ... the Olympics guy ... thinking he was going to be the international champion of whittling ... only to have his Olympics dream whittled down to size ... actually whittled down to nothing!" There's always a few chuckles, probably uncontrollable laughter once I've left the premises. Some time I ought to set my phone on record and leave, then come back and see...

My family always told me not to be bitter: God never gives you anything too big to bear. Which was definitely true, although maybe not in the way they meant it. God never allowed me to bear an Olympics gold medal around my neck! That's for sure! Hell, when it all comes down to it, I wish I had at least a silver or a bronze. Is that too much to ask? I sometimes scream, shaking my fist at the heavens. Yes, He whittled my ego down to size, that's something. Whittle this! I scream, extending a massive middle finger---- You get the idea.

It all started when I was a kid. I had more time on my hands than I knew what to do with. And what I wanted to do with my hands they said wasn't good for me. So I didn't know what to do, until Grandpa got me a set of pocket knives. Several different sizes. All the way from a tiny one piecer, with several larger one piecers, all the way up to a larger three piece knife, with a blade so big you had to screw it together for the full length. Custom made.

Of course at first I was like any other newbie, cutting myself, missing the wood block all together. But with time and patience and great effort -- sometimes sweating blood in my labors -- I was able to whittle pretty damned good, and I actually was doing intricate little sculptures. I whittled so many ships in bottles, in the Who's Who of America in 1967 they said I was responsible for what would've been the third largest navy in the world, if they'd only been full size. But by the time I went full size, it took so long to whittle entire ships, I had to settle for achieving only the 45th largest navy in the world.

Naturally they thought I'd be a shoo-in for the '72 Olympics. My family was busy hosting benefit dinners for my Olympic expenses. And I did my part to make them memorable, whittling toothpick holders for each table and the toothpicks themselves. That's tough work, because whittling something so small, each toothpick had to be tested for durability, leading to some very sore and bloody gums on my part. I couldn't chew for a month; I could only chew broth, nothing more.

Anyway, as everyone knows, the Olympics giveth and the Olympics taketh away. New sports are added, and older sports, deemed passe and utterly worthless (those bastards), are eliminated. And that's what happened to me. The word came down from on high in the fall of 1970 that whittling would no longer be part of the Olympics in '72. Remember all that trouble at the '72 Olympics? Turned out I wasn't the only one pissed off.
Posted by dbkundalini at 1:58 PM