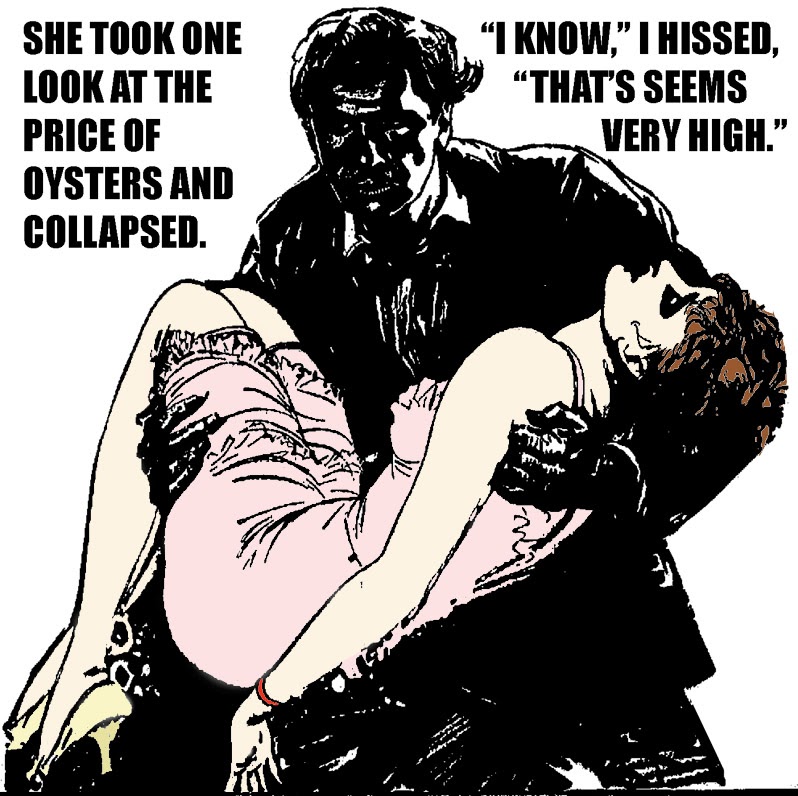 It's been a great time in my life. The dates with my girlfriend are piling up. I think I've had two, three, or four. Depending how you define it. If it means the sun's down and we're out to eat, that's one thing. If it's simply going to the grocery store and picking up a few things -- bread, baloney, oysters -- that doesn't count.

But the exact count isn't important. What's important is that whatever we do, it's quality time. And whether I'm invested in the relationship. And I believe I have been, maybe even more so than anyone could've expected. With my previous history, completely undefinable.

At the store, I suddenly got the creeps -- I'm creeped out! -- that something might happen to her. And since I played hell finding a girlfriend, obviously I don't want to lose her easily, not after having played hell finding her. So I've been looking out for her safety. Nothing wrong with that, right?

She had a couple hours to kill this morning, so, hey, we got together. We were going to go out for lunch, when I mentioned we could go to the grocery store and buy food and have more meals for the money. It could've been a couple burgers at a burger joint for $18.00 (with fries), or $70-80 worth of stuff at the grocery store to make eight or ten meals.

It's when we got there that I started thinking of all the stuff that could go wrong and harm our relationship. The place hasn't got their parking lot entirely scooped out after the last snow, which is a danger. I dropped her off at the curb, the cleanest spot in the place, and she was able to walk in safely. I parked a little farther, trying to avoid one of the places next to the cart storage, to avoid getting my car nicked by someone. So she was left alone a little longer than is wise.

I got there in time, though, and all was well. Now safely in the store, I started thinking, and dwelling on, all the things that could harm her. Being bumped by other carts, having her purse stolen, being hit on by some creep, or crazed gunmen jumping out of nowhere, etc. We walked around the store. Her purse was in the cart, and I kept a good hold on it the whole time. Any time another cart neared us, I had her behind me and to the right. If there were any creeps in the aisle, I spotted them in advance and we went a different way. It went like that, something she appreciated. As for gunmen, we were there on a good day, as there weren't any.

No. What actually did her in was the price of oysters. We've had a couple "stay home dates," eating oyster stew. This is all true. The oysters we got at a particular place were only $1.98 a can. But when we were shopping at this place, they were a whopping $2.49 a can, a precipitous leap in price. If you figure that in percentages, it's pretty steep. She collapsed.

By the time we got to the exit -- and this really tried my feeble muscles, especially with the extra weight of a can of oysters in my coat pocket -- I was carrying her, scouting both directions and calculating the odds that there'd be danger. The Secret Service has nothing on me.

The store has stop signs as you cross into the parking lot, but honestly I had no reason to trust people to stop. So we waited a little extra time before going on. Then I wasn't so sure her nightgown was protecting her from the cold, so I stuck my gloves down her back. I helped her through the snow, got the door open, helped her in so she wouldn't slip, and finished off by helping her with the seat belt. Anything mechanical has hidden dangers.
Posted by dbkundalini at 5:04 PM