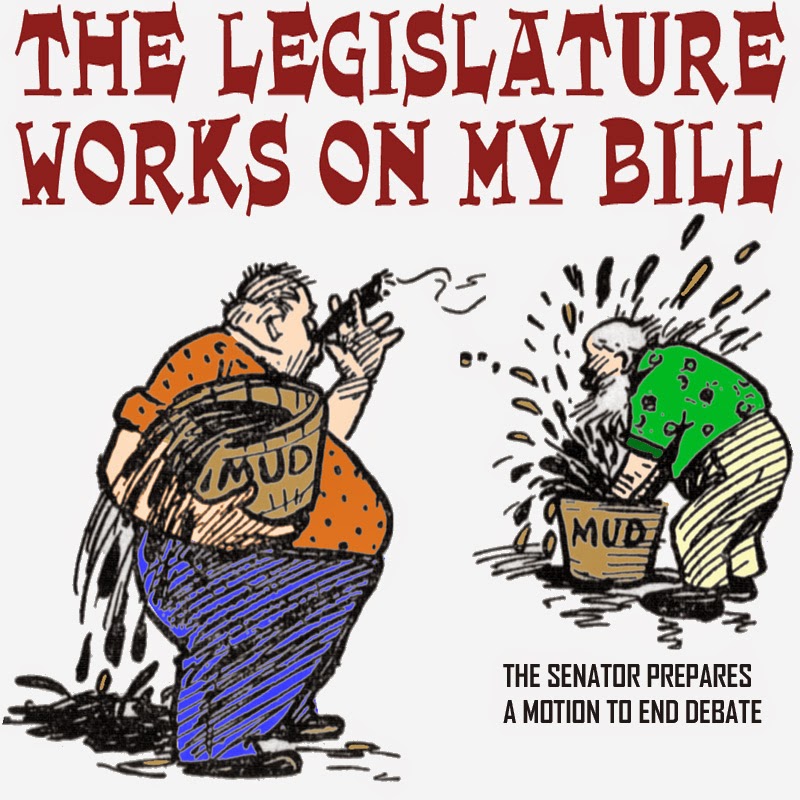 Polecats are what I always think of when I think of the legislature. And I'm not even sure what a polecat is -- I hate to confuse myself by looking it up -- I'm guessing it's a cross-pollinated skunk and weasel with some other unknown vermin. The key thing is it's accurate enough for the situation at hand, the legislature.

In school we always heard the legislature was there to help us, being our representatives, our own decent neighbor and a bunch of other neighbors from other towns. And of course your own decent neighbor cares about you and gets together with the others and does positive things. The reality's a lot flakier, and that's when we turn to the polecat to describe them.

That's the system, where your vote doesn't mean much. Because even if your guy wins, if you show up agitating you're just a kook. With any given legislator "not sure" what went on, giving him cover for the next election. Oh, and don't you dare try to describe it to anyone else, like I'm doing here, because then you're such a hothead, very easy to dismiss. They're all gathered in assembly, loudly shouting, "USA! USA! USA!"

Maybe you can tell, it's been a bad day agitating on behalf of the "Destroy February" movement. But having some stealthy habits, I believe I insinuated myself enough that it wasn't entirely unprofitable. They open the capitol for sightseers, my fellow citizens, who are into the history of the place, the artwork, etc. My fellow citizens love to see the old agitators of the 1840s, the hardy settlers who obviously spent their time in action, not tourism. I glance up at the rippling muscles of guys with axes and think, there's a lot of flab in our present day.

But the old settlers and agitators, they knew who their legislator was. He was the guy swinging the ax next to them, the one with the big top hat. And they'd get together at the end of the day for a huge pint of whiskey. They'd say, "Here's where we stand, you get in there and vote for statehood or you die." Of course he was already on the side of the people. "Damn right we need statehood, because the savages will brutally massacre us otherwise, and that's just the Feds!" Then they were back to drinking and horseplay, especially ring toss with the saloon's mounted buck.

During this time I was able to appeal to my fellow citizens, surreptitiously, and I got some good nods and clenched fists. I was happy. The average man "gets it." He knows February isn't really anything worth keeping. What's so good about it? I can't think of a single thing. It was originally a stopgap measure, meant as a temporary fix until whatever war that was going on was decided. With the intention being to deal with it when peacetime came. Then they were exhausted and it just slipped by. How much better it'd be to take most of its days and plump out the other months, then keep, say, 10 days as a kind of stump month, used for reverie and hell-raising!

But you don't have to be at the Capitol long till you see the legislators aren't the average man. They're bought and paid for by fat cats, so they're ensconced behind closed doors. No drinking, no backslapping, no camaraderie, just distance. Occasionally peeking out to see if the coast is clear so they can scoot unseen past the tourists and get another coffee. This one guy, a couple counties up, had his pants down to his knees, barely aware I was standing there. He and his secretary were doing something inside but he was still thirsty enough for a quick coffee run.

In desperation I shouted "Destroy February!" It took the idiot by surprise, and he blubbered out something like, "Fill out the form and we'll run it by Legal." Legal? Put off by his immodesty, I'm thinking, Aren't you the guys who make the law here? If I had more than one vote, and lived in his county, I'd vote him out in a second. That's why they want to stop so-called voter fraud, because they know we'd take out the corrupt ones.

The worst thing you can do if you want to get something positive done in this country, like destroying February, is to take it to the Legislature. It's so gummed up there, it's a wonder anything gets done. They give you the cold shoulder. If you're not a tourist going gaga over the artwork and spending money, for yet another touch up of the gold dome, then what are you even here for? Go away!
Posted by dbkundalini at 9:55 AM