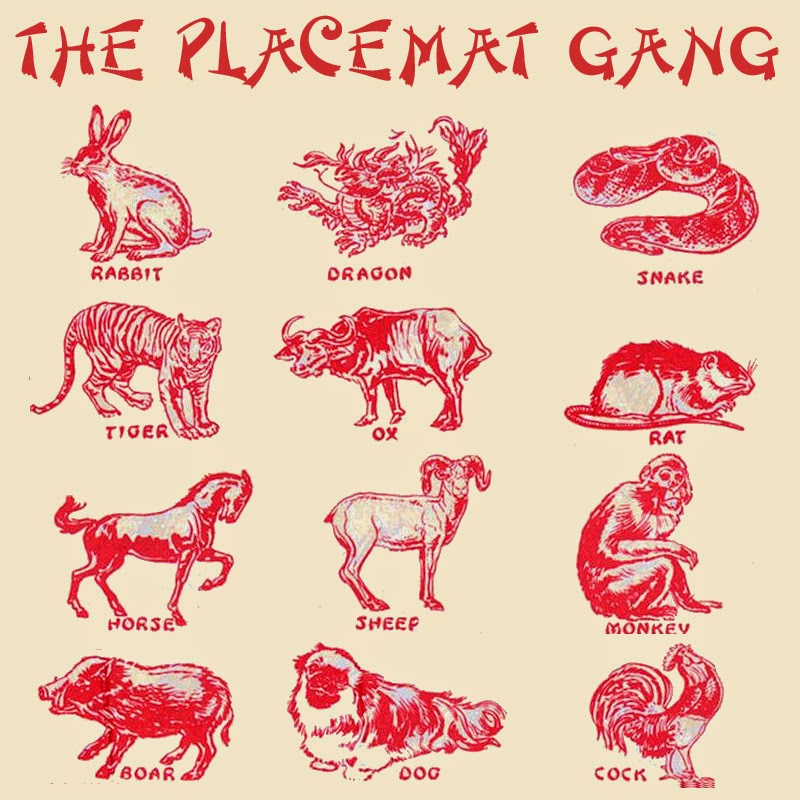 If you're Chinese -- working in a restaurant or not, and if not we hope you find a job soon -- you've probably been reading with some concerns my recent posts about destroying February and reallocating its days around the calendar. Concerns because of a possible conflict between your own zodiac system (as found on a well-known Chinese restaurant placemat) and my plans for February. I had the same concerns...

I don't know what it was exactly, unless it was still the bad effects of the Chinese buffet I ate a few weeks ago, but I woke up last night, in the middle of the night, feverishly trying to work it out in my own mind, what the plan would mean for honorable placemat. Would it somehow lose its effectiveness and become unusable, even obsolete?

I love those placemats, featuring as they do the animal kingdom from a Chinese perspective. You'll recall they've got 12 animals as zodiac illustrations, relating to the year you were born, with advice for the lovelorn. "Is it good that my husband is a rat? What if my girlfriend's a cock? Should I marry her anyway? Or get her fixed?" I've actually tried its advice a few times and got some real dogs. As for me, going by my birth year (1953), I am a rat. Even though I like to think I'm a tiger.

In the middle of the night, though, I couldn't quite remember what the system was. I was thinking the illustrations pertained somehow to the particular months. So say the boar was February, and you got rid of the boar, it'd throw the whole thing out of whack. The boar's pretty virile. If it was the rabbit left out that wouldn't be so bad. But rabbits are very prolific. Not that that does the Chinese any good, since they can only have one bunny.

It might not be so bad to cut the boar out, just thinking out loud. You get rid of the more virile ones and a sneaky little rat like me starts looking better. Although if, as above, my girlfriend truly did turn out to be a cock, then whether I'm rat, rabbit, or boar, we're gonna have problems. It's not that I'm necessarily that choosy, but I like some truth in advertising.

Even though I was wrong about the system -- destroying February has no effect on the Chinese placemat -- I'm still glad I got up to check it out. China's a big place and for some reason we always associate the word "hordes" with them. They've also got some mean evildoers -- like Fu Manchu and Wicked Wang Fu -- who'd love to sink their big gnarly fingernails into a guy like me. Were I to offend the most populous nation on earth, it could be tragic. Which I would never do intentionally, and if I have done so, accidentally, just let me sincerely say, So solly.

Now that we're all friends again, if each Chinese person out there were to send me a note of support for destroying February, that would be great. And if each one of you could also enclose $1, win or lose, I'd be filthy rich.
Posted by dbkundalini at 9:28 PM