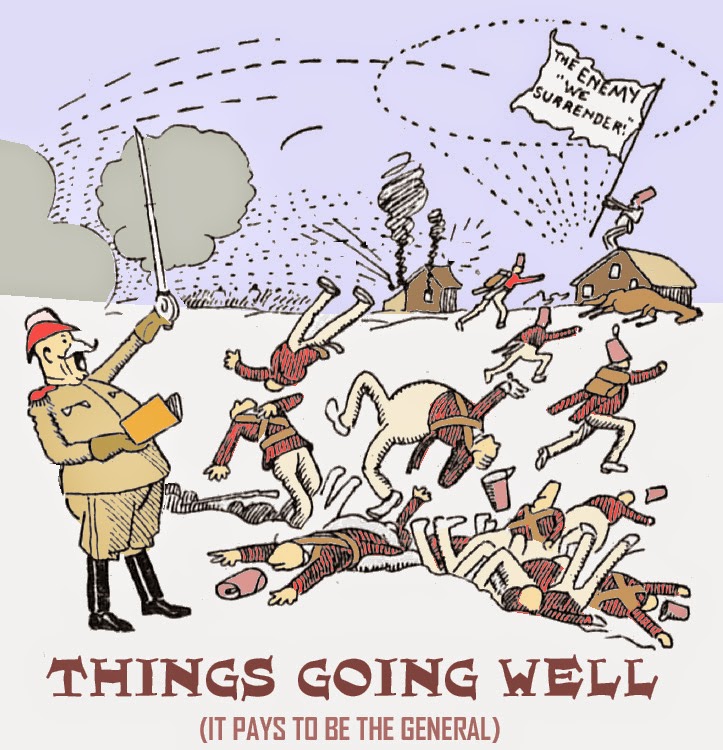 WE CAME THAT CLOSE TO WINNING,
BUT FINISHED THE BATTLE WITH
NEXT TO NO SURVIVORS, ONLY
ME. AND I'M GOING INTO HIDING.

I was up early this morning, looking for signs of success against February. My heroic attempt to destroy February as a month on the calendar, then divvy up most of its days with other months and preserve a "stump month" of 10 February days, hung in the balance. Alone in my prayer citadel -- other than the courthouse the highest point in the county -- I tried to have faith, but reports coming in from around the world painted a dismal picture. There was no popular groundswell, none whatsoever, to do away with February.

I held out hope, biting my fingernails to the quick. Various lieutenants and family members climbed up to check on me. The braver ones warned me to be prepared for bad news. They said reports arriving from other states and countries showed the chances of destroying February as bleak. Legislators were not meeting, Congress pitched pennies instead of working, and the United Nations was closed, ambassadors laid off without pay.

Finally, I realized I had to put on a brave face. And show that everything was fine with me, in spite of my disappointment. I stripped off my outer layers of clothing. (It's a cold day.) Then my thermals. Last, I shed the rest of my clothes and stepped out on my citadel balcony, totally naked, me against the world! In one last expression of defiance, albeit vain, I peed. Reasoning, if I can't destroy February, I can go for the Guinness world record for the longest adhering urine stream. I was stoved up with two pots of freshly ground coffee -- jet black! My stream might still be flowing -- somewhere, somehow -- even as I write this two hours later.

OK, I did the government thing, but the heart of the campaign had to be this very blog. I put the word out there everyday -- with a worldwide outreach -- and what did people do with it? That's what I'd like to know! I know you'll say this is in bad taste, but frankly I'm shifting much of the blame to my readers, whose personal pleasure was their only real concern. Pretending to be on my side, pretending to do the heavy lifting, but then ... not really. I'd guess most of them are also into XXX entertainment, whether in some rundown smelly/sticky theater, or right there with their iPhones "in hand."

I've suspected all along that I've been dealing with mental cream puffs, halfwits, and the usual run of dim bulbs you meet on the internet. They're spoiled, there's no commitment. You know what, I remember the internet back in the '90s, man. Back in the '90s, man, you'd run a campaign -- destroy February, replace Christmas with Worship a Pine 2 x 4 Day -- and you'd get it done. Then the 2000s came -- 9/11 and people became pansified -- and now we're so soft we've essentially melted. It's 2015 and you couldn't raise an internet volunteer to YAWN on cue; they'd be asleep already before you flashed the sign!

OK, you had your chance. So don't come looking to me next year when February rolls around again. Just suffer. Because I'll still be nursing a grudge -- an eternal grudge -- stewing over how you deserted me, then even went so far as to callously stab me in the back right when I was on the brink of victory. The very worst time for betrayal, because the hurt never leaves. I'll always remember ... this time back in 2015 when I took on this literally thankless task. When my readers were so "into pleasure" they couldn't be bothered to support a brother in his hour of need.

It's a lot different from what I grew up with. I grew up hearing about the Depression, with my relatives' memories being how they stuck together, through thick and thicker. So where did things go so wrong with society? You know what I blame it on? There was strength in World War II, then a huge letdown, and people relaxed. When, guess who, Hugh Hefner comes along and fills the vacuum with Playboy magazine, setting the old mores aside as well as the old values. Look it up in any sociology text. Hugh Hefner gave us the dawn of a hedonism that would've made Caligula blush. And therein is the reason we couldn't destroy February.