February Has Weakened Me 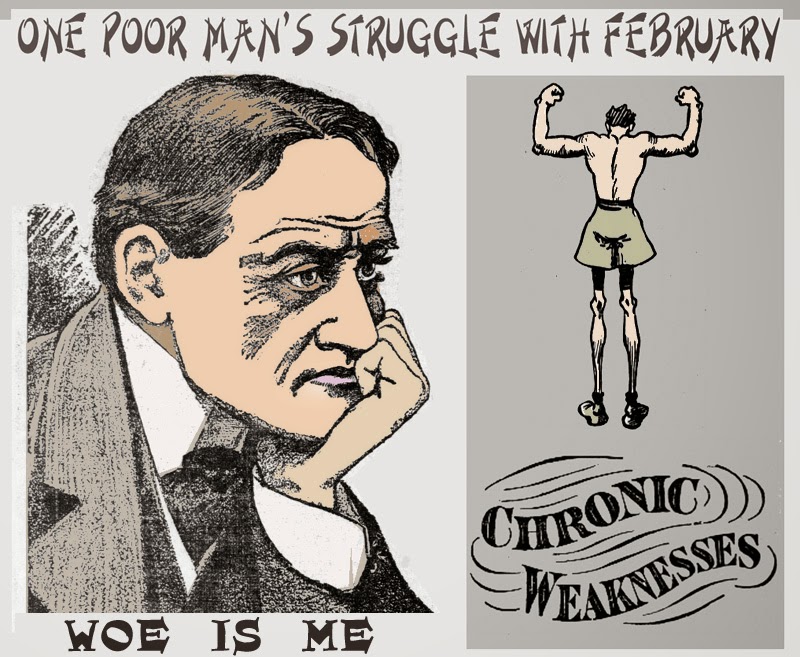 What a terrible few days I've just come through. You hear about the flu and blow it off as no big deal. Till, like every other ridiculously bad thing in life, it comes stalking you. Then it's a huge deal, in this case knocking me flat on my ass. That's why you haven't seen me around. (My posts of the last few days were composed by a bot, after feeding in "February, screed, bad vibes, terrible month.")

Anyway, I noticed flu symptoms coming on. And I denied it. Because I'm strictly a "mind over matter" guy. If I say it shall not happen, then it shall not happen! If I say, "Thus far and no farther," if it encroaches a silly millimeter further, it dies. And so forth. I take a stand, and if reality comes against me, I prevail, changing it to suit my demands. This time, I don't know what happened, I must've flinched, and BAM, I was sick.

The odd thing about this is I'm so seldom sick, it's crazy. So I'm concluding that it wasn't a problem of me flinching, but that I was directly weakened by February itself! That's the charge I'm making. Think about it. The most dreadful month -- this 28-day emasculated limp-along shame of a month -- was looming nearby. Everyone knew of my public praise for January and March. I didn't make it a secret. And no one cared. But February was watching, so like a dark planet, tiny, dwarfish, and yet with enough mass to have gravity -- evil gravity -- it pulled me in and gave me the flu. One more reason to hate it.

Believe me, folks, I fought and kicked. I put up a real struggle. Other men fell on my left and right. Women beat their breasts, their anguish was so bad. Half the town literally fell dead. The hospital threw up their hands. Even the police were powerless in the face of an enemy they couldn't immediately pin down and choke the snot out of. What to do?

I had the idea, relaying it to the governor, that in these darkest of times, we had to try anything and everything. He listened closely, as I started to cough. I described two courses of action: 1) We carpet bomb the entire state with railroad cars, preferable engines, crushing out even the tiniest bacteria; 2) We come out publicly against February and remove it, posthaste, from the calendar.

Just like that, the governor was on the phone to the railroad companies, who rushed to the capital such a massive assembly of (mostly retired) railroad cars, with a few engines still with the vitality of their prime. I watched in awe as technicians hooked those massive hulks to the undersides of airplanes, which took off on a moment's notice and wreaked such havoc that the state will not likely recover till just before the next election. The little shed in my own backyard -- everyone made some sacrifice -- was crushed, as were the homes and every possession of most of my neighbors. Family members were killed, making for a long, gray weekend.

For the survivors, the flu still lingered, getting stronger, slipping out from the rubble, worming its way out, under, through, and sideways, down. I imagined the gathering of bacteria marching their way in victory over mankind. Wouldn't you do everything you could to defeat it? The governor did almost everything I asked. The bastard drew the line at February. Almost persuaded, but lost.

Because February's dread hold on the public imagination, apparently, is so great. Leaving me to suffer the flu in silence, yes, exercising my 'mind over matter' chops to shorten its grip, yes, but nonetheless feeling pretty puny. While others suffered and died, making the ultimate sacrifice in order to keep the worship of one fool month. What a tragedy.

Among the countless missing, there was even a lost cat in the neighborhood, its owners dead, but their survivors offering a huge $500 reward for his safe return. I went to prayer and signs indicate they found him.
Posted by dbkundalini at 1:16 PM