February -- State of the Month 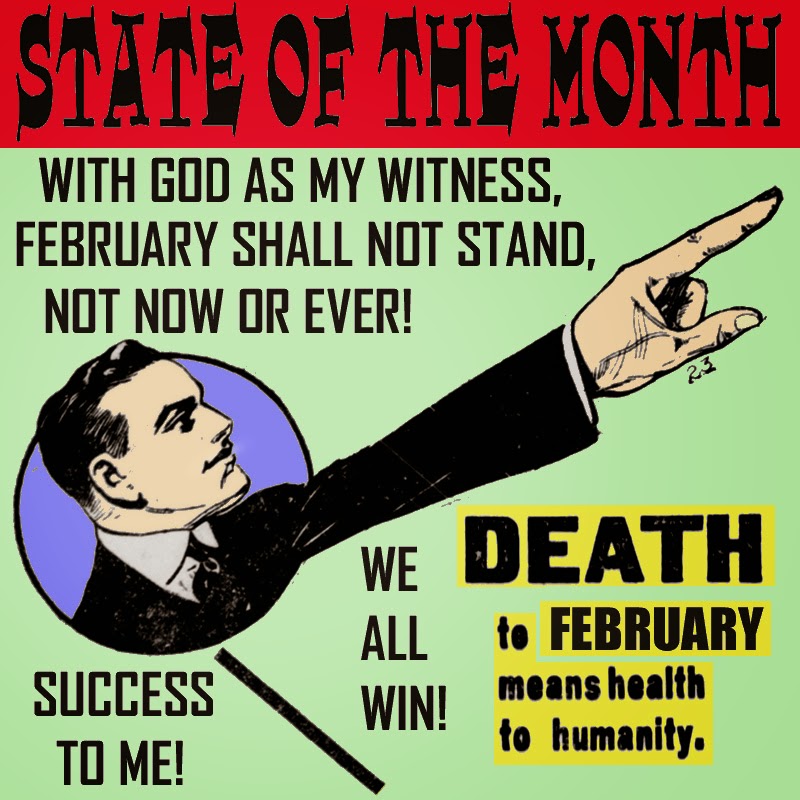 We're halfway through February, and the excoriation of this the worst of months has been merciless. I'm doing my best, laying into it with everything I've got. I feel like I can't rest, because in so many ways I'm carrying this whole cause singlehandedly. That's not to say there aren't supporters out there, both silent and vocal, but only that I'm not getting good reports from the field as to any activities.

So now, today, it's time to pause, being halfway through this short, shrimpy month, and take time to evaluate our progress, and see what more we can do. We'll redouble our efforts if that's what's necessary, to make the final push, to destroy February once and for all. Our vision is good, our vision is great, but it will remain but a vision unless each of us does our individual part.

First, the good news. Again, it's been my efforts that have carried us thus far. You can look back through my posts in late January and in recent weeks and see that I've taken the fight to the enemy. There's been resistance, of course. Even a pathetic 28-day month like February, inexplicably has its share of supporters. It doesn't matter what it is, somebody's a fan of everything, whether it's sadism, tofu, or tattoos.

But one fight at a time, right? Right now I've got enough on my hands. Media coverage of our cause has been virtually nil. Many folks out there haven't even heard yet what we're doing. That's where you, my supporters, have to take up the slack. I'm not sure what you've been up to, but one thing I'm pretty sure of, you haven't been doing much to help. I'm going to ask you -- no, I shall demand -- that you get up off your flat ass and get busy. You supposedly want this thing as much as I do, only you have a funny way of showing it. I'm sorry if I'm coming across as harsh, but, friends, we have to strike now, and make a mockery of February now; because once it's over, the public will forget the little bit they have heard.

Let me thank you for the many "Attaboys!" I've gotten. Many of you are very faithful, at least to the point of paying lip service to a good cause. It's just that, yes, you're a lot like the rest of the general public, lethargic if no one's physically lifting you off the couch, putting your hat on, and pushing you out the door. I knew a few deadbeat kids like that in school, and of course they've grown up and aren't much better as adults. I'm simply asking you to change your ways temporarily, until we win this fight.

There are others of you, I've heard, who are essentially laid up and think you can't do anything. I was inspired to get a note from a guy who was literally 950 pounds midway through January, but because he believed in this fight, in solidarity with me he refused to eat, and he shed 700 pounds. This is true. He went from 950 to 250, but unfortunately died. Let's win this thing for him!

I've also gotten notes from some of you who hate February but say you can't get out and do much. You're on disability or whatever. But I'm going to ask you to do something, to show that what you say is true, OK? I saw this on TV so I know it works. If you could send your best gift -- I don't care if it's $500 or $1000 -- whatever you can put together, perhaps by hitting up relatives or neighbors -- that would be great. It will pay rich dividends -- that's my guarantee -- when next year at this time we're enjoying a year without February.

Maybe there's even a few of you in a hospice bed, also at your life's end. You know you can't take it with you, but you'd still love to look down from heaven and see a world without February. If that's you, please call in your attorney, and leave your family in the hall (this is just between us), and sign the papers to get the money to me ASAP. When I hear that you've gone to your reward, I promise I'll tip my hat in your general direction.

We can do this, we really can! And I'm going to say something to demonstrate the utmost boldness: With God's help, February shall not stand, not today, not now, not ever! When we've wiped this scourge from the face of the earth, we shall all win!

Get up, then, and join me in this fight. Get up off your couch, turn your TV off, get out your checkbook, and let's have your best gift. February's going down!
Posted by dbkundalini at 8:26 PM