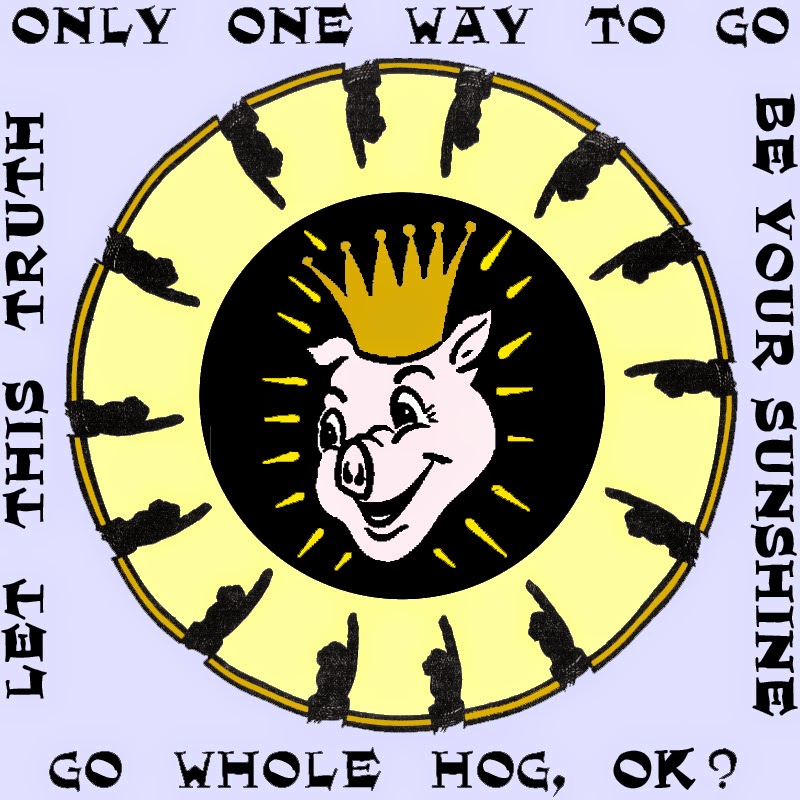 My family's philosophy when I grew up was, Anything worth doing is worth doing whole hog. Go long, go deep, or go home. Lukewarm doesn't cut it, we'll spew you out of our mouth.

Now I'm old, and kids come to me for advice. (It's true, here and there you find stragglers.) And I tell them, much like Joseph Campbell's "Follow your bliss," whatever it is, go whole hog! They look at me, with doubt in their big innocent Walter Keane eyes. But I get a stern look on my face, and in my agitation point toward the door, snarling, "Now!"

I've been going whole hog all my life, and except for the dangers of always being ALL IN, it's been a fairly good ride.

But, let me say, I used to have a secret grudge against some in my family. Even though we believed in going whole hog -- and this is literal -- I'd still catch them buying half an animal. Know what I mean? That's one of three things: Shortsightedness, absentmindedness, or hypocrisy. I don't think it was hypocrisy, because they still went whole hog in everything else.

I'd think, "What's the use of buying half a hog or beef? Especially if it means letting the other half go to waste. Buy the whole thing!" And lockers back then were meant to handle the whole thing. These were people who went through the Depression. When times were good they built meat lockers like you wouldn't believe, the size of football fields.

In more recent years, though, as you'd probably guess, some of our sicklier friends stopped eating vast quantities of meat, and that didn't help. Guys at the locker threw up their hands and went out of business. The enormous freezer units were pulled out -- electricity also went up, taxes went up on the larger buildings, etc. Leading me to one conclusion: Life is nothing but a big conspiracy to screw us out of decent sized meat lockers.

There were still folks who needed lockers -- thank God -- but they had to do with smaller ones. My family, I regret to repeat, had a part in this devolution, buying half an animal when a full animal would've been better.

You never know what your actions might be if you don't go whole hog. But I've seen it happen. That's one of the benefits of old age. The wisdom of going whole hog. The chief detriment is they think you're crazy, depriving themselves.

A long-haired (bald on top) guy marches around the square with a protest sign, "Buy the whole animal." But across the lawn, a bunch of PETA women are stripped naked and painted like tigers. You tell me, who draws the crowd? The old man can do nothing but go home in tears. That, and prepare himself for even smaller lockers. Tell you what I'll do, I'll double down on buying personal freezers, energy crisis be damned!

Sorry I went on and on about it. There's very few things I care passionately about; meat lockers just happens to be one of them.

Anyway, people come to me. And that's what I say, Go whole hog. The ironic thing is, I myself have never ventured very far from my old comfort zone. But when I chose this path, I went whole hog. And so here I've been, in my comfort zone, at my grandparents' old place, vegetating and chilling, chilling and vegetating, but always doing it, strictly, whole hog.
Posted by dbkundalini at 10:21 AM