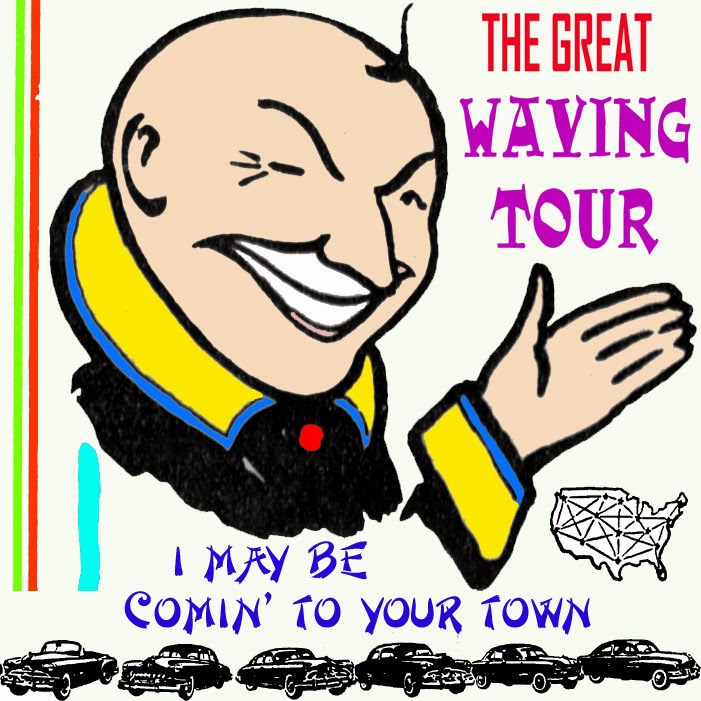 Everyone knows my blog as a worldwide sensation. I have readers in literally every country on earth, and that even includes North Korea. Blog mules have been hand-copying posts and smuggling them in in packs of cigarettes; Northies are so eager to get this vital information they unroll the cig papers and throw away the tobacco.

You could say I've specialized in the world, which is not to say I've neglected my local presence entirely. Maybe a little. My next door neighbor knows me, and a few others. Meaning, obviously, I need to "take a sad song and make it better." So I had the idea of a waving tour. Drive around waving and let people know I'm here. And I'm thinking of them. And how friendly I am.

It went really great, too. Although, to be totally honest, I got some suspicious looks, and several wouldn't wave back. The very first one, I'm leaving a dead end neighborhood of nice houses and a lady comes out to do something in the front yard. She sees me, I lift my hand tentatively and wave, and she doesn't wave back. She probably thought I was bad news, probably reading the blog and thinking I've taken more of an interest in the Ukraine (which I have) than my own town. I'll do better, ma'am.

In fact, quite a few folks looked like they were harboring various resentments, also refusing to wave, even though I had my best face on, very friendly. It could've been I was hitting too many dead ends and cul-de-sacs. But my theory was the folks on the wide open avenues see so much traffic they're not looking for waving tours. But the others, they don't get much traffic.

But the same theory -- I know this from reading the paper -- is something criminals know. A lot of cul-de-sacs in town have in fact had something of a crime wave. Enough break-ins to go around, practically everyone's had one. So on the surface of it, it seems like they'd be glad to see a friendly guy driving through the neighborhood waving. If they knew anything. Try to put 2 and 2 together folks: the criminals are out in the afternoon, I've waving when it's morning.

It wasn't long till police cars were lingering in the area. Being a nice guy, and not thinking of my own safety, I even waved at the police. I say that, because, you know -- it's touchy -- the police lately haven't got the best reputation. You don't want to appear to be too chummy with them, because you don't want any of the animus to rub off. Some of the donut shops even have them using the drive-through only.

I came upon a couple schools and as luck would have it the kids were out for recess. This was around the noon hour. So I thought, you know, start 'em out young, realizing there's actual decent friendly people in the world. I waved at them like I would anyone, appreciating the look of joy on their faces. Although, disturbing at it sounds, many of them looked like they didn't want to wave back at a stranger. Me a stranger? I've lived in this town all my life!

A bunch of the kids looked like they were running back in the school to get their friends. That warmed my heart. But when they came out with the teachers I knew the real truth... Teachers need love, too, so I waved at them. They got their phones out and were calling, apparently their own friends. Except pretty soon the police were back in the area, patrolling. It made me wonder, maybe some of the crooks knew it was afternoon and so had returned.

I kept driving, looking for friendly folks, kids, nursing homes, and honking and waving in the hospital area, waving at terminal patients looking out for their final view of anything. It was a real blessing for one and all. Then toward the end I felt honored to have a police escort, directing me toward home, where I ended up.

It's great to get out and feel the love, and to know I'm a Very Important Person, someone the entire town can be proud of.
Posted by dbkundalini at 9:00 AM