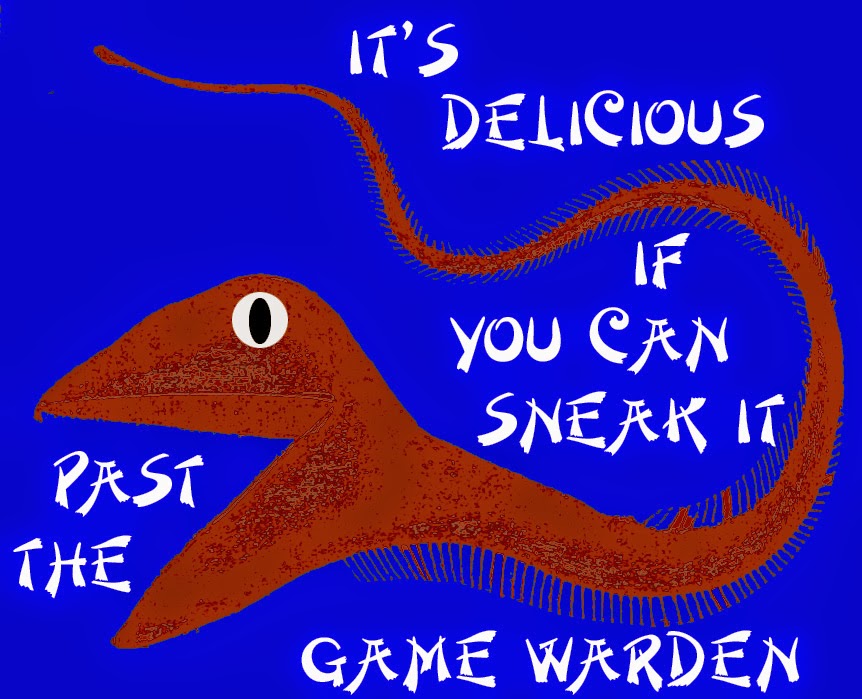 FISH AT BARGAIN PRICES -- I've got an inside line on a great value on fish, if you can manage to get it home. (I have an idea how it could be done, more on that later.)

This is at Dick's Thrifty Econo-Valu Food Smartmart up in Silage City, so not too far from anyone. Not to be confused with Maude's Discount Groceries & Pastries of Walter Falls. Entirely different place. Of course Dick's has the full cash register and moving grocery conveyor and Maude has the cash drawer and table for your things.

Anyway, Dick's has this really sweet special on fish, but only for a limited time -- it's been going on six months now -- at 79 cents a pound. What's it called? I don't know, it's sort of flat bony fish with a spine that doesn't quit. Very flexible, you're not wasting sacks getting it home, it folds up real good.

The big problem -- if that's what you want to call it -- is the game warden in Silage City is on the look out for anyone with fish who doesn't have a valid fishing license. And not just the plain old state license, it needs the Silage City stamp. You haven't got the stamp, it's a $100 fine.

The guy who told me about this special, and 79 cents is a killer price, got stopped right outside of town. Just like the guy knew he was coming. He's leaving Dick's, headed east, when the light comes on and he's stopped. "Are there fish in this car?" the game warden asks, and of course it leads to the sack and the wrapped up fish. The short version of his complaint is this, "How do I know you didn't catch those fish and wrap them up yourself?" Which indeed would be a good way of rigging the system in your favor!

"But it has the price sticker right there and it says "Dick's." "But how do I know you didn't take that off other groceries and paste it there?" Great question, and for that matter how does he know you didn't just print it on your printer? I can see the game warden's point, even if I suspect foul play on his part. "But I don't have a fishing rod with me?" "How do I know you didn't hide it down by the lake?" It's tough to come up with answers, isn't it!

So the guy gets a $100 fine, which takes away, obviously, some of the savings he counted on when he took advantage of the 79 cent special. That's a sad thought.

But I've got a happier thought, which is this, how we could get away with it. One, I show up at Dick's with a very smokin' vehicle and simply outrun the game warden. I think he's still driving the old standard issue green truck he's always had. That's dicey, though, because he might send word ahead and you'd be paying other fines. Probably a better plan would be this, for a bunch of us to show up, buy fish, and all of us just take different roads home. He couldn't catch us all!

Whoever gets caught's a rotten egg.

Here's another issue. Who do I think is alerting the game warden? It's a huge mystery. But my first suspicion has to be someone at Dick's store. Maybe Dick himself, since they're cousins.
Posted by dbkundalini at 12:55 PM