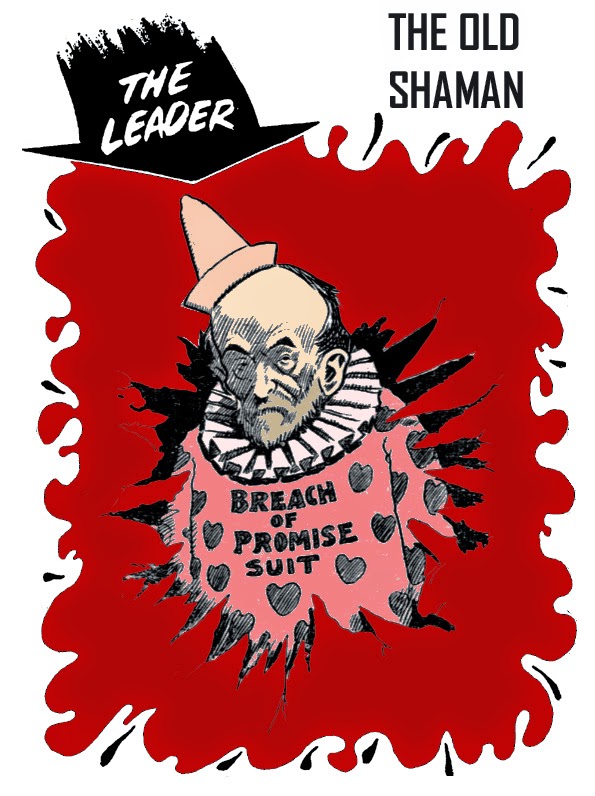 I was into mythology a number of years ago -- I've since backslid -- and the stories I most "thrilled to" were the tales of the old shamans. Probably because, no big secret, if I was going to be anybody in their world, it'd have to be a shaman. I wouldn't mind being one right now, frankly.

These were/are the guys with the inside track on the divine. They know the ins and outs of how to deal with people. They're busy discovering the secrets of life, then discreetly, I'm guessing, keeping them hidden until they're needed. And they're never fully needed, meaning they're always holding something back, making themselves men of mystery and therefore needed. In the Bible, I'd say Moses filled that role in the stories. And that's why they had a law about killing witches, because they also had the inside track, but with it, their own mind.

If I were to drop down into one of these communities -- thatch roofs and all -- I believe they would immediately take to me, just like that. The people would gather around, I'd be passing out Wrigley's gum, and everyone would love me. Except for the shamans. Their guardsmen would drag me to their quarters, where we would have a great stare down. Then, in looking into my fantastic eyes, they would look deep, then deeper yet, then deeper still, until realizing they could never plumb the depths. You with me still? And that's when they'd give up, commit suicide, and name me new shaman.

Until that happens, though, and I'm not like Margaret Mead or someone, always traveling, going off to these little villages and making a nuisance of myself, I'll be here. The shaman I'm writing about today, one I heard of, had nothing to do with Margaret, insisting he was a self-mead man.

This guy had all kinds of powers, like they all have to have. Whatever it was, the heights, the depths, the widths, everything in creation, he seemed to have an in on. What about sickness and health? He was there too, any disease: gout, bad back, sore leg, winnebago, nagging cough, cold feet. And of course he had the in depth knowledge the community needed for their continuing prosperity, mental and physical.

One of the big concerns mankind always has is about the weather. It's still a concern we have today. I was thinking of the weather earlier today when it was snowing. It meant I had to get out there with my snow-blower and wake up the neighbors. It was supposed to get warm and melt it all off. So I was amused to see the parking lot scoop guys out early, knowing if they didn't hurry it'd all be gone and they'd make nothing.

Here's how the shaman thing works with the weather. A householder comes to visit him. He walks outside, he looks at the color of the sky. He licks his finger and gets it real wet, then he sticks it up into the wind. He looks straight up, he looks straight down. He climbs up a ladder and looks to the horizon. And so forth. Anything he can do, he does.

Then they go inside, and he considers the evidence well before making his pronouncement. If I say this, this might happen. If I say the other thing, something entirely different might be the result. These are the kinds of thoughts that go through your mind when you want to tell all, but you have to be very considerate. How's it going to affect me if I get it wrong? Then he clears his throat and gives the townspeople his best advice, in the unique Pig Latin his tribe speaks: