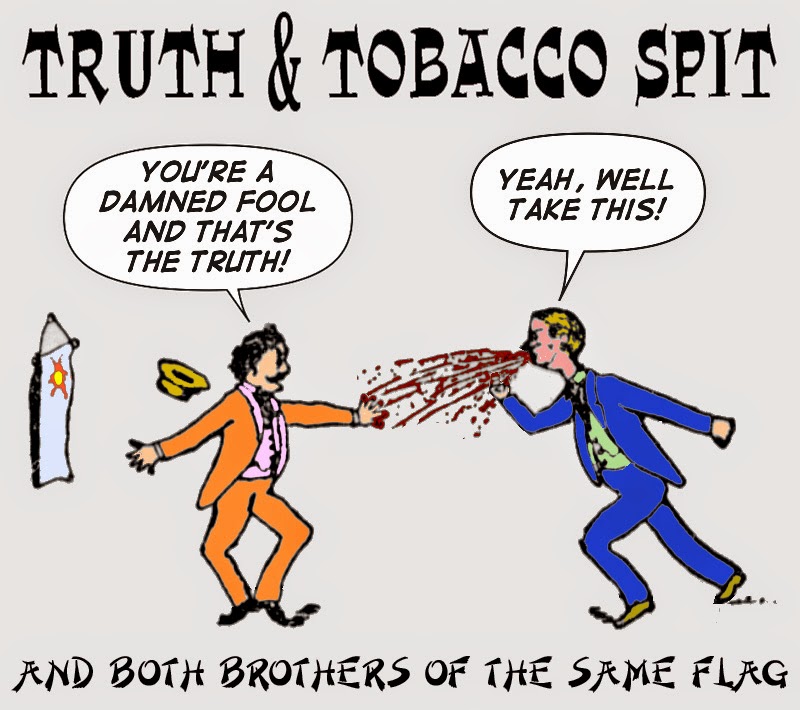 To me, the picture says it all. It's the age-old story, as old as time itself -- Abel and Cain -- yet told again and again, ever new: Two brothers of the same flag who can't get along, try as they may.

The man I grew up with, other than my dad, my grandfather, was a dedicated follower of the unholy chewable weed. From the time I was a boy, I just assumed refrigerators came with a tall stack of small cans wrapped in brown paper, his brand being Copenhagen. I never really "discovered" it, since it was always there, part and parcel of life itself. And grandpas chewed it.

In my Grandpa's case, he seemed to have little bitsy teeth, perennially stained with the juice. Here, there, and everywhere, he was chewing, and spitting. Out fishing, working in the yard, and driving, that was his thing. Which never became my thing. This is one of the so-called "temptations" of life that I can honestly say I never felt, and so never acted on. Not even the tiniest smidgen. It's never entered my mouth. Meaning, you'd about have to agree, that I'm a person of truth, not tobacco spit.

That's a great feeling. I hadn't thought of it in quite those terms before. Being never tempted. Because, had I been tempted (and I've never yielded to every temptation I've had), seeing it as a solo venture, I'm sure I would've tried it. But chalk it up to me being a person of truth, at least in this one instance, and not tobacco spit. I'm proud of it and I'm not proud of it, know what I mean?

The illustration shows the terrible division that can come if the negatives of your relationship are allowed to fester. I think the story goes something like this: The brother of truth shared with his brother the dangers of tobacco chewing. Back in Grandpa's day we didn't realize there were consequences to our actions, but today we know, you can get in some serious trouble based simply on choices and the things you do. Tobacco chewing can cause mouth cancer, and who knows what else.

The brother of truth, as the saga goes, elicited a tentative promise from the other, who was to seal the deal by getting both professional help and options other than chewing tobacco. These would include gum, mints, and you know something else that's good to chew, although most people have never heard of it, these licorice sticks that are almost like wood. They make an interesting chew. I remember talking with a man in the early 2000s who chewed these, but then soon died of other causes. True story.

You've probably guessed the end. The evil brother never "found the time" to set up an appointment for professional help, vowing on their common flag that he had the strength to end the habit on his own. But what happens when the good brother comes home? He finds him with a plug the size of a cantaloupe! Going at it with everything he can muster! If he'd had jaws of steel and pistons in place of mandibles he couldn't have chewed it with more gusto!

They came to verbal blows, the one calling the other a damned fool, and the evil brother -- it's sickening to think of it -- willfully spitting close to a gallon of spit, like a reservoir, and coating his brother. Then, predictably, one went one way and the other went the other way. And that's it, they left behind their common flag.

I don't know if you're a tobacco spitter or a person of truth. You alone have to live with the consequences.
Posted by dbkundalini at 1:06 PM