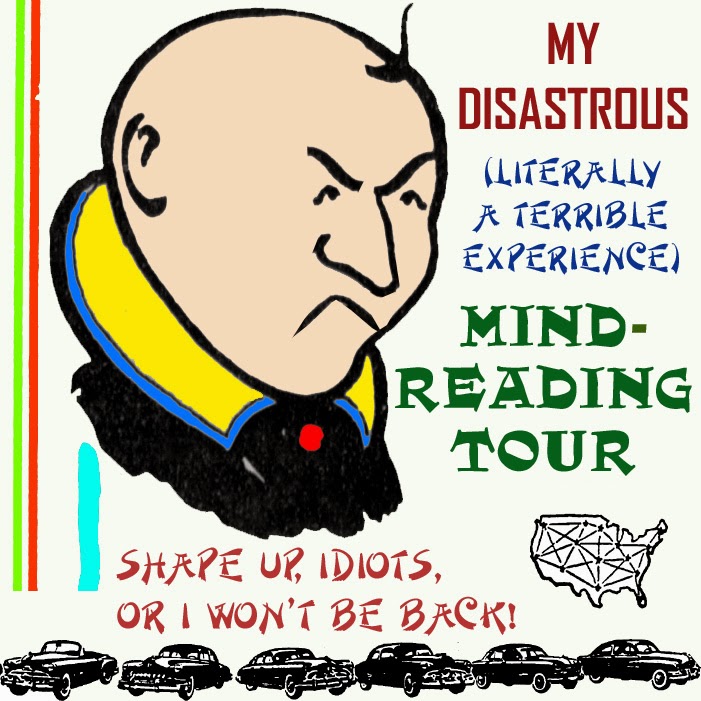 Just last Thursday, I shared the glory of my waving tour. I was super-happy with the great reception I got in the various neighborhoods. As I recall, some of those cul-de-sacs don't see five cars a year -- and those are just criminals scoping it out -- so they're grateful a nice guy like me takes time to come through.

Well, it's Thursday again, and this time, darn it, it didn't go as well. I thought, I need to get out there for another tour, but this time something more in depth than waving; this time would be a mind-reading tour. What are people really thinking? We all want to know that from time to time.

Admittedly, I've always had mixed results with mind-reading, going way back to school. Different ones knew I could read minds, so I had a hard time fitting in. One time I got involved with the wrong crowd, and could only get out of trouble by testifying against the others. Yes, they were pissed. But fortunately I could read their minds about what they wanted to do to me. There were obvious cues, including knives and truncheons. My worst memory is of one big bruiser with a motorcycle chain wrapped around his fist. And such a mean look.

It's a gift I don't say much about, but if my motives are entirely good, you know, I figure, What the hey? I'm going to get out there and duplicate the joy I had with the waving tour, I'll get a good reception and everything will be great.

But what happened? I got nothing but negative vibes from the folks. I started on the west side, the ritzier part of town. A lady came out with her little chihuahua, and she thought I was likely a criminal, probably thinking dirty thoughts about her, and sure to be trouble. I considered getting out and having it out with her, except, of course, any hostility would only reinforce her thoughts. Still, I couldn't quite control myself and flipped her the bird, which she returned, lustily. Her little dog also looked spoiled!

At another house at the end of that block, there was a guy mowing his yard. He saw me and was thinking he should probably double check that he'd locked the door, because, "This guy looks like trouble." I should say mind-reading requires intense concentration and staring at the subject. Mere glances give poor results. The guy ticked me off so much I was thinking maybe I should wait till he got to the other side of the house, then come around and steal his gas can. Except, as above, it would only reinforce his thoughts.

In the mid-region of town -- not too rich, not too poor -- this one guy had all kinds of thoughts. According to him, he'd been suspecting his wife of cheating on him on Thursdays, a day he normally works. But he decided to stay home today and catch a glimpse of the bastard. Obviously, he thought it was me! A guy who respects the sanctity of marriage. I continued however to read his thoughts, as he pictured his wife naked at the door meeting some guy. She didn't look bad! Meaning, just to get back at him, maybe I should come back next Thursday.

On my way to the poor side of town, I passed a couple of cops, whose thoughts of me included some insults about the quality of my car, and whether they should pull me over. They reasoned, We've got a quota and there has to be about a million things we could ticket that slob for. But -- and I know it sounds stereotypical -- the donuts they were working on had about three minutes left of peak freshness, so I escaped the dragnet.

On the poor side of town, I also got some bad thoughts. First it was kids, thinking they'd send their little brother into the road. Then when I stopped for him they'd run over and lie down against my tire, looking like I hit them. They'd work out a deal with me, knowing "an old mark" like me would jump at the chance of paying them off. I flipped them the bird too, and called out, "No pay off today, suckers!"

Just then, Mom comes to the door of the house, two other kids hanging from her breasts, and calls them over. She can see they were thwarted, then turns over the thought in her mind that she knows me and might be able to get me for child support for the youngest pair. I'm thinking, "Honey, I've only been drunk one night in my life, the night you were stripping at The Filthy Bird, and you ain't gonna pin those kids on me! You ain't got a DNA sample and I'm gettin' the hell out of here!"

Crazy people and their crazy thoughts. It goes to show what they say is true: Nice guys finish last.
Posted by dbkundalini at 7:06 PM