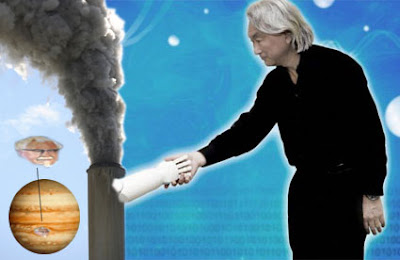 I often sit idly daydreaming of new concepts, new worlds, and envision shapes, all on my own. I can sit in the bathroom, looking at the towels hanging there, and see objects, like seeing things in the clouds. Or on the rug. I thought I saw my dog Underbrush the other day, and I hated to get up to feed the actual dog because I knew I'd lose her floor-bound image. So it's a very lonely life.

But I know my industrial double is out there. I'm not talking about a guy who looks like me, but that would be a plus, but someone who has the same kinds of everyday feelings. And of course someone whose vision for the world is my vision, the vision of residential industry, factories everywhere, smokestacks like forests, huge asphalt parking lots, warehouses, electrical grids, cities connected by conveyor belts, and lots of runoff ditches for the kids to play in. He'd also need to be seriously against the major industrial powers, in a state of constant rage against them, without an off switch. Those SOBs make me so mad!

I've been watching the Science Channel, mostly for the dirt and scuttlebutt I'm getting on some of the major industrialists in their "How They Do It" and "Factory Made" shows. And of course I'm enraged especially because I know how these shows are made. They appear to show the major industrialists as models of efficiency, with a great ability for mass production. But it's all done with stop action filming and speeding up the film. They blatantly admitted it one day, when they stopped the film so we could see the details of weaving a particular kind of fabric. Then they "sped" the film up to "actual" speed, which, as far as I'm concerned, had to be at least 20 times faster than reality. So it's completely fraudulent ... but that's another story.

What I wanted to get to is one of the personalities on the Science Channel, and I had to look up the spelling of his name since he's oriental, and in oriental lands they don't even have the same letters we have; they have some kind of picture alphabet that looks like they inked the bottom of a chicken's feet, whacked off its head,  and flung it on to a big sheet of paper. They taught us something like that in school. They said the Chinese originated printing, using a cut potato. And we know potatoes and chicken go great together, so there's probably some validity to the theory.

So I looked him up. And his name is Dr. Michio Kaku. He's got a show that figures out ways (theories) of bringing "impossible" science fiction concepts to reality. Like time travel, teleportation, and, one I'd love to challenge him on, getting a decent meal at KFC. I agree teleporting is possible, and time travel will happen -- just a matter of time -- but as far as I'm concerned, the rest is impossible! They're is beyond hope. And yet, and yet ... if anyone could do it, it'd be him, especially since, as we've seen, the orientals have a way with chickens.

The thing I wanted to mention about Michio Kaku is that the Science Channel has a great promo for his show. It shows him in a crowd of people. The crowd is milling around, looking around, and in the foreground we have our friend, Michio, also looking around. The big difference, of course, is he's the genius in the bunch, yet he seems to fit right in with the average man. But, O! if the average man only knew who he was walking with! While he's doing this milling around, they're saying things like, "Pushing the world to the next level," "It doesn't get any better than that," "The best is yet to come," and "We agree, what he said about KFC."

When I see this ad, without fail, I think of myself, the philosophical father of the RIM, also walking in a crowd of well-meaning morons, without an industrial double. Michio Kaku has no double in that crowd! He alone is the one who knows how to do the impossible! The rest of the idiots wouldn't be able to speed up time by orbiting a black hole if you gave them a piece of toilet paper and moved their hand in place. In fact they're such stupid looking representatives of mankind, they better be careful or he'll send them back to the Stone Age where they belong.

So it's me and Michio. He's a genius, and, it's impolite to say such things about yourself, but I'm not so bad either. If Ray Charles could say it about himself on every other album, why can't I? You know Michio knows he's one. That's why he can be so casual in the crowd. He has no personal anxieties and doubts. He's even happier in the stupid crowd, because it makes him stand out more. And who wouldn't like that? I get that with this blog all the time. I keep looking for another blog as good. My writing is so good it must be generated by a machine, two months in advance...

And I really resonate with some of Michio's promo lines: "Pushing the world to the next level," "It doesn't get any better than that," "The best is yet to come," and "KFC is to food what a toilet [redacted]." And each one of those could just as easily apply to residential industrialism. But there'll be no higher level than residential industrialism, because when we're done, there won't be room for anything else! And so on.

But what I resonate with most is the fundamental loneliness of Michio Kaku in that crowd of people. I know you're out there somewhere. My industrial double. If we got together, that'd be great! We could share our greatest vision: It's morning in America, a shining factory on every hill! Then after hours, we'd get together and say creative things, trying to outdo each other, like, "That smokestack ain't belchin', it's freedom," and, "A yo yo is a round thing with a crack up the middle. I pulled the string but never saw the tampon."
Posted by dbkundalini at 4:34 AM