Why I Treasure Industrialism 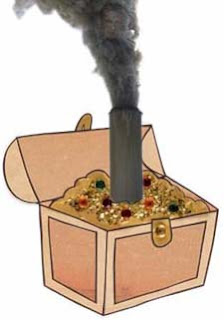 Since every single day of my life has now been given over to industrialism -- in the Residential Industrial Movement (RIM) -- I have plenty of time to think over the issues and challenges of that work.

And some of the challenges can be almost too much even for me. Such as the latest run-ins with the Major Industrial Powers (MIP), whether they're trying legal tactics to block us in court, or turn the public against us in the media, or whether they're physically after us with their hired goons. But I do my best. I'm not alone, so we work through those things and go on.

But along with the challenges -- and thankfully it's not just that -- there are also many joys that come my way. For example, I love the simple things, like the joy of neighborhood children out splashing in the run off ditch. They came in my factory the other day, sopping wet, and laughing up a storm, the little urchins. I asked them what was so funny, and one of them, a big kid with his hand behind his back, showed me; he had about five dead mice by the tail they said they found next to the ditch. To see them having such a great time lightened my load considerably. And if they're able to kill mice so easily, of course that's a plus.

Along with that kind of thing, the little things of life, I also have the joys of residential industrialism itself, the good cause of neighbors and a country pitching in together, with every man now able to have his own factory. Of course every man doesn't have his own factory yet. This thing just got started in April or May! We've got a long way to go till we see that dream. Although I've been wondering who's going to be the workers when it happens.

We have a good cause, especially if you think about what we had before, with all industry being in the hands of the greedy, unprincipled MIP. The moguls in their failed system had become so corrupt and exploitative, there was really no two ways about it. Something had to give. And even though no one quite imagined what it would be, someone was there with the philosophical vision, the underpinnings of what actually took place. I'll always be proud of that.

Along with that, I treasure the community of industrialists we've become. That's just about the way it has to be, because we can't do it on our own, but how much better to see the good in it. We need common supply and delivery routes, the economy of pooling orders, help from one another in completing orders if there's a major injury or fatality at a plant, and we agitate for better terms for our goods at market, strength in numbers.

Those neighbors who have industrialized are the best neighbors. We get together on a cool evening sometimes and sit in the shadow of one of the factories, or out by the road next to the signage and talk over the issues. The kids are up climbing on a smokestack, and the higher they go, the smaller they look! You hope they won't fall in, but there's probably no danger in that; they're smart enough, if they get smoke in their eyes it's going to sting. We might need to start the ladder out of their reach.

I also treasure the values. This goes along with the community feeling. But I think it warrants its own little category in the list of things to treasure. Honesty, hard work, the willingness to take a risk, a sense of optimism. It's infectious! We got those values from our fathers and grandfathers, we're living by them today, and we're passing them on to the next generation, our sons. These are the values our sons didn't learn back when they went to school. But now as they spend everyday in the factories, it's all becoming second nature to them.

And no list of things you treasure about something about be complete without mentioning the literal treasure, the easy money we're making. RIM members are careful to buy RIM products. And of course the rest of the world wants what we make. We make the things people need everyday. Right in my own neighborhood, we have disposal diapers, industrial vats, wheels for hospital beds, tires, paper plates, and electricity, just to name a few. There's a perpetual market for each of these products, meaning we'll be rolling in dough for the foreseeable future. And that's something to treasure.

The RIM is a great movement, giving industry back to the common man. I'm so happy and proud to be a part of it, finding in it an endless treasure ... for myself ... and everyone. We're going to keep it strong and growing, for ourselves, and as a trust for any of these kids who make it to adulthood.
Posted by dbkundalini at 4:34 AM