A Rainy Day Visit To The Industrial Pervs' Park 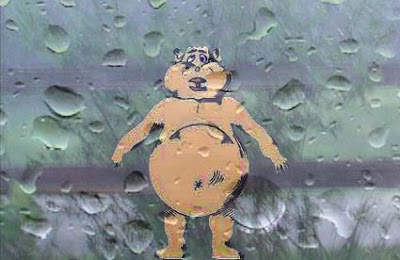 Remember the other day, I said I wasn't afraid of the major industrialists (those SOBs) anymore? And how I would go to the park they'd been hanging out in if and when I wanted? Well, I'm living by that word. I was just there again yesterday!

But I have to confess, it did cross my mind, what might happen to me? But I just figured, They haven't been able to catch me all the other times -- and I must've been there 10 times already -- so I was bold. And good thing I was, because nothing bad happened to me this time either. Whether that means they're not there anymore, or not trying to get me anymore, or just that it was a rainy day with less traffic, I don't know. All I know is I went in, did some reconnaissance work, and left ... very much on my own terms.

I know everyone's up to speed on the nature of this park. But there could be one person in my very large readership who doesn't know about it. I've been able to check the map that shows where my readers live, what countries, and, frankly, I don't get that many visitors from Africa. So there might be an African today who's wondering what I'm talking about.

For my African friend, this park is like a small jungle, with thick trees and lots of foliage. It has numerous paths leading I don't know where, because I've never walked them. All day long, and it's probably worse at night (I've never been there at night), there are guys showing up in cars. The guys get out of their cars and walk the paths. Huh? You tell me what's going on! The connection with the major industrial powers is: Some of their men -- both chiefs and underlings -- have been known to hang out there. They've been doing whatever it is they do there. And since I'm Public Enemy No. 1 when it comes to the major industrialists, there's no doubt in my mind they would just love to show me exactly how deep their grudge goes, if you catch my meaning.

I noticed a couple things in that paragraph that need to be on my to-do list, if I'm truly not afraid of the major industrial powers. 1) Do some actual reconnaissance down the paths. What do you think? If I bought some really good tennis shoes, I could probably escape; no one's going to make me take off my shoes. And, 2) Go there after dark. If I got some black pants, a black shirt, socks, etc., I'd probably be OK too. But ... after dark? Can you imagine what it'd be like to be leaning against a bush in the dark that could give way at any minute? I don't even want to think about it...

Anyway, I was there yesterday, not on the paths, not after dark, and it was raining. So nothing too exciting happened, right? Only if you don't get excited by the everyday human drama, the desperation of your fellow creatures. I do love seeing the possibilities, the desperate lengths we (they) go to ... even in the rain ...

It's rare that I'd have to keep my window up, but the rain was coming down from every direction. The glass was getting fogged and it was very stuffy in my car. I was nervous about wiping away some of the fog because it might look like hand signals. So every once in a while I rolled them down, then immediately up.

I didn't see anyone actually walking the paths. It was very wet out there and they would definitely need the protection of an umbrella, not to put too fine a point on it. Which would probably be exactly what they wouldn't want.

I was looking at a car over to the north. The windows looked dark, tinted, so it was a mystery who was inside. Plus, his car was running. Maybe to keep the defrost going, depending on what he was doing and how much steam that vigorous activity generates. Maybe he kept it on for a fast getaway in case of unwanted park dicks, since they might want to crack down on such things.

In an amusing aside, I imagined, What if he's just a normal guy like me, also writing in a notebook, describing me like I'm describing him, as some kind of lech? He'd probably be saying, "There's a guy over there looking very inquisitive about what's going on around him. Like he's trying to get up the nerve to risk the rain on the paths..." But I didn't want to get wet -- from the rain or otherwise -- I've heard that's how sugar melts.

About this time, a guy pulled in who might've been one of the industrialists. I felt very nervous. He had an industrial-type truck, an empty flatbed on the back. Maybe between loads or between loads, if you catch my meaning; there definitely wasn't anything on it; so he was either between loads at the factory, or maybe he was the biggest optimist in the world, what with the rain, looking to take on one. He pulled up next to my car. I never actually saw him, because he was too close for comfort, and I couldn't bring myself to the verge of looking.

I kept writing, but in a very subtle way, not showing my instrument. From his point of view, he must've thought I was "occupied," so he pulled away prematurely and ventured his truck up the road about 100 yards, where another car was parked, backed in, up against the entrance to one of the paths. I was too far away to maintain my close vigilance, so I started up the car and ventured that way too, very slowly. I noticed the guy in the other car. He had his window down -- despite the rain -- and his one free nude arm was resting on the window base. I actually thought about pulling in next to them, but, you know, that'd really take ... guts.

Obviously, I was pushing my luck, and I didn't want to get lucky, so I thought better of it. A line came to me: "There's nothing going on to the naked eye -- although a couple naked eyes might be making an appearance at any moment." There was a dance definitely going on, a car backed up and waiting, a truck with an empty flatbed rolling in very impressively; it'd be enough to get their motors going.

At that point, I left, keeping my honor ... and everything else ... intact.
Posted by dbkundalini at 4:34 AM