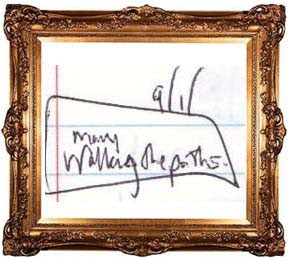 You might remember, as documented in one of the two links above, that I was at the park, and, just as a guy was coming out from the paths, I was reaching for my notebook. Normally, I would've written more, and in my normal handwriting style. But when he glanced over at me, and I was feeling very threatened, I wrote just these four words, and in a scrunched up writing style. I seriously thought the guy might come over and demand my notebook and that anything more than this brief note (and in more legible handwriting) would be something that might incriminate me in his eyes. And then, who knows what might've happened? I know I didn't see him wipe his hands, so they were probably wet with something.

But looking at the four words as they turned out, maybe I ought to do a lot more very brief writing under pressure. Because as far as I'm concerned, that's one of the most impressive things I've ever done. I described it yesterday as being like a cameo, and that's the perfect term for it. It'd make a nice broach or necklace or maybe a cool 3D thing, like those little plastic cubes that have a 3D thing encased in them in the exact center. That'd be cool, because then I could see it from every angle, including from above or below or both.

Anyway, I am suitably impressed.

Some of the other great four word phrases are great indeed: Shakespeare's "To be or not." The Constitution's "We the people of." Or the Declaration of Independence's "When, in the course." The Bible has a good one to start it, "In the beginning God." My Cousin Roto had an interesting one he used to always say when we were kids: "Shut the f*** up!" And, just to give one other example, from the moon landing, "The Eagle has landed." So you can see I'm in very good company, saying, "Many walking the paths." Four simple words, but, oh, what words!

I'm thinking of some of the other "fours" in life. Like the first four notes of Beethoven's 5th symphony, the four legs of a chair, the four basic directions, the four fingers left on a hand injured in a punch press accident, and, to go for a very obscure one, the four words of Eldad and Modad (in the Greek), but I can't remember what they are. El dad looks like "The dad," and Mo dad looks like they're confusing him with mom, so that could be an issue.

As to my own four words, I've already got them clipped out of my notebook and framed. I'm just waiting now for my full due, the kudos, plaudits, and lauds of historians of the future as well as the citizens of the world in this present day. If each of you could send me as little as one dollar, four quarters, that would be a very welcome tribute. Thank you in advance.
Posted by dbkundalini at 4:34 AM