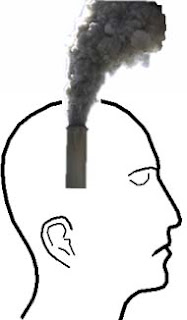 If you've got your own factory, and probably most of you do by now, then you know exactly what I'm talking about, that industrialism changes your thinking. I like the picture; I have the bliss of an erupting smokestack in my head, psychologically speaking. All the good things of industrialism influence my daily outlook. Serene.

This would probably be true with anything. I know for me I get into things. Like if I concentrate on anything long enough. Like music. It's probably true for everyone. If you listen to an album 10 or 12 times, you'll be thinking about it in your sleep, humming the tunes, thinking about it until you're blissed out, or sick.

For me, and others I've talked with, the fact that we spend most of our lives looking at conveyor belts, a constant parade of consumer goods in various stages of assembly, parts bins, pallets, etc., means that's what we're thinking of. Every few seconds, even when everything's shut down, I can hear the beeping of trucks and forklifts backing up in my head. We eat, drink, and sleep it, and even let it keep us warm at night. There it goes again, beep beep.

But it does keep me warm at night. I was writing about this very thing recently, how I'm turned off to both women and men in this matter of keeping warm at night. Just to clarify there, I've never been turned on to men, but I would be even less so now if I had been turned on to them at all before. As for women, yes, a few of them have turned my head now and then, but thanks to industrialism, it's mostly then. You see enough lunch ladies with deep voices and hairnets, it does something to you.

Most of the changes in my thinking have been positive. No matter what I'm doing, I'm trying to do it in the most efficient way possible. And part of efficiency is the desire to mass produce. You set up the parts in a particular way, you coordinate how everything has to go together just so, then you assemble the item, repeating the steps until you're done. But it can be hard to turn off. The other day, my mind drifted off in an industrial reverie while I was doing something, and when I came to I had about 75 BLTs on the kitchen counter! And I usually only make two. It's impressive that I could fry 50 pounds of bacon without realizing it.

Then when you have an increase in efficiency, you want to keep refining it, always gaining a second or two here and there, always trying for the extra edge. I find myself speeding up all the time even when it's not necessary to do a good job. I allot myself a certain amount of time and take deadlines very seriously. Seemingly gone are the days when I can really relax and take my time and do a particular thing without the pressure of aiming for greater efficiency. And it can be painful if you nick yourself shaving as often as I do. Industrial speed, like the old ginsu knife guy.

It's also a little disconcerting when you get out of your element, the industrial setting, because, of course, your thinking goes with you. I was at the city library yesterday, trying to relax. I was really there to look through their books about inventors and inventions. I wanted to get a list of everything that had been invented, figuring that anything they didn't mention would be fair game for me.

But then I got a stack of magazines from the rack, put them on the little table next to one of the easy chairs, looked up at the clock, and proceeded to scan through them as fast as possible. I had a feverish pace going. In the end, I left a heap of magazines on the floor five foot deep. I managed to make it through everything from The Advocate to Z Magazine! Pretty good time, too: 8 minutes, 42 seconds! Then I noticed I was the center of attention for everyone in the place.

I liked hanging out there, very quiet except for one thing. I complained to the librarian about all the loud beeping but she swore she didn't hear it. So I just tried to put it out of my head and enjoy myself.

I saw this one guy there -- he caught my attention with his look. He had a real industrial strength leather jacket and jeans. He was dressed up like a guy who never takes his clothes off. They fit him to a T. He had long hair, a beard, looking almost messianic, and was carrying a pack and a guitar. Now here's a guy, I thought, who (maybe) knows how to live. I'm not sure he knows how to live; I'm just guessing. It seemed like he was carrying everything he had. That'd have its bad side, because you need somewhere to put your stuff. But it'd have its good side, in that he obviously goes here and there singing his songs and maybe sleeping under the stars.

It started me thinking: Here I am with a Grandma, a house, a half acre, a tire factory, an electrical generating plant, a warehouse, this blog, my dog, and many other things. But am I blessed? Or is all this a big weight around my neck, holding me down? But now, looking back, of course I'm blessed, now that I'm back in my factory. The beep even fits in here! So, it's dangerous to go to the library, because it, like everything else, can influence your thinking, however, in a negative way.

By the way, when I was sitting by the magazines, the guy with the guitar disappeared behind me and I didn't see him again. I wanted to study him. I wondered where he went and if I might see his guitar stashed behind a stack of books, but I didn't. Then, amazingly, as I was leaving the building, here he came back in! It made me wonder why he even left ... 15 minutes before. Did he need to plug the meter for a parked suitcase? Our eyes almost met, but it didn't happen. I was a little afraid I wouldn't be able to shake him, so that kept me from asking him about his guitar and whether he knew any cool songs.

How about that? Our eyes almost met. Looking back, I should've allowed it. He might've been my industrial double. Just an ordinary guy, who started thinking about going on the road with his guitar, then it got the better of his thought process and now here he is, no other place. But even almost is kind of cool. A road person, a leather jacket guy, a guitar guy, a messianic beard guy, living in his world of the road and scrapping for quarters, probably, in a rare encounter with me, the writer of this famous blog, the philosophical father of the entire Residential Industrial Movement, and who knows what all I might be famous for in the future? I know if I ever run for office, I'll have a few sexual comments to answer for. So I might take the easy way out and become a priest.

But had it happened, he would've looked at me and I would've looked at him. And each might've felt a little sorry for the other. And each might've felt a little envious of the other. And maybe I would've won him over, or maybe he me. Maybe he'd like the security of industrialism keeping him warm at night. And maybe I'd like the feeling of really taking a chance in life, of showing up at libraries with my guitar or piano in whatever town I happened to find myself.

But that's all passed now.

Anyway, I spent last night in a warm bed, and that guy, who knows what kind of night he had? A wild animal nibbling at his beard, then pulling back in and going to sleep. I'd guess I had more comfort, even with the beeping, but he probably had more to write a song about. Being him would change my thinking just as much as anything. Whether I have industrialism or not, my thinking is always going to be different.
Posted by dbkundalini at 4:34 AM