I Might've Seen My Industrial Double 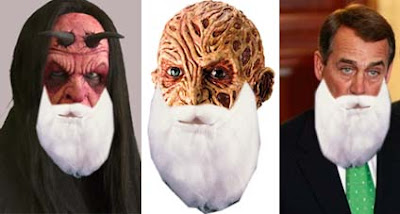 A WHITE BEARD AND AN EVIL LOOKING FACE
I was writing yesterday about "Desperately Seeking My Industrial Double." So with that fresh in mind, when I went out to breakfast, I was hoping against hopes that the fates would smile on me and be kind and that I'd find him. But really, what's the chances? Sometimes life works that way. You've got yourself primed for something, just in time to catch up with the machinations of a benevolent reality.

It's been my experience, anyway, that reality is benevolent. I keep hearing of industrial accidents, but so far none has happened to me. You have gravity, plus some of our parts hanging from the ceiling, about a ton each. Any one of them can give way at any time, and frequently do. Then here it all comes crashing down, raining down in random directions certain death for those unfortunate enough to be in its path. And of course I hear of fires that get started in folks' factories, whether from a pile of greasy rags, a neglected welder, or the kids playing with the dials in the boiler room. Then a whole family is burnt to a crisp. But that's the way it goes; you have to learn somehow. More often than not, so far, I've been OK ... I haven't lost, only gained...

That's the benevolence of reality I'm talking about. So, there'd be no way of really knowing today -- the way coincidences work and all -- whether I'd go out and run into my industrial double. He'd be my double first and foremost. And if he'd be that, he'd also likely have a deep interest in the workings of industry, particularly with the Residential Industrial Movement (RIM) as opposed to the major industrial powers (MIP). Or, say we were compatible in every other way, he would soon be up to speed on this whole thing of industry, and he'd come to hate the MIP as much as I do.

Just thinking of it's doing a number on my head. Because what if he happened to be the son of a MIP executive? Some balding, cholesterol-choking, arteries-hardened executive I've skewered sometime in the past... Then it'd be something like Romeo and Juliet, without the romance. And hopefully without the death. But he'd have to turn his back on his father, who'll die soon enough anyway, and embrace RIM values, as I'm sure he gladly would, otherwise how could he actually be my industrial double? And it's not like he's going to inherit the plant, because with the RIM increasing in every way, we'd likely be there to liberate the MIP facility in the confusing transitional period.

Anyway, I went out to breakfast today, and was looking at the usual assortment of elderly folks. The restaurant looks like a care facility. Or a reunion at the funeral home. But there's one thing you can count on with the elderly, and I'm on the verge of it myself, they love their breakfast. They have very little they have to do through the day, so they're up early and out eating. Plus, they love the senior discount, which, guess what, I also qualify for ... but I'm reluctant to claim. Because I don't look that old and I'll look suspicious claiming it, because my eyes will be shifting and I'll break out in a sweat.

While I'm eating, suddenly a guy comes walking past me. I catch a glimpse and it looks like he's carrying a notebook, which I also have. And I hear him telling the waiter, "I'm waiting for a guy with a white beard and an evil looking face." I immediately think, Who would say something like that? An evil looking face and a white beard? That guy could be my industrial double!

Now he's alone at a table about 10 feet from me, facing me. I keep glancing over, and pretty soon he looked at me when I was glancing. I was momentarily trapped, so I offered a shy wave and went back to my eating. I didn't want to look like a crazy guy ... How do you walk up to someone and ask if they might be your industrial double? The possibilities started going through my mind: What do you think of a total stranger waving at you? Are you trying to fulfill any prophecies about meeting your industrial double? Nothing I could think of sounded quite right.

Pretty soon, another guy came through, at random, an old guy on his way to the bathroom. And for some reason, he (the old guy) waved at this other guy. It made me start wondering why everyone's waving at him. Could the old guy be looking for an industrial double as well? But he was old, as I said, so he seemed to be just another elderly guy there for the discount, being nice.

The guy got up and checked at the door, looking for the white bearded guy with the evil face. But he never arrived. I kept on eating, debating whether I should go over and ask pertinent questions on the subject on my mind. But then I didn't. I got to the cash register and thought I might turn back. But how weird would that look?

I left the restaurant and justified it like this, If he's my industrial double and it's meant to be, we shall meet again. It's the decree of benevolent reality.
Posted by dbkundalini at 4:34 AM