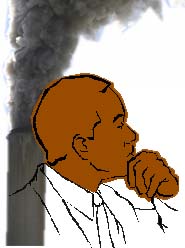 Intuition is an aspect of our experience that makes us feel like reality can be inside out. We think we have it all figured out, by reason, then a kind of abiding, strange sixth sense is there to give answers and direction instantly and unforeseen by our ordinary range of consciousness.

Or something like that. What I actually know about it -- even though it's probably as much as anyone -- is very little. But I know I depend on it, and treasure it when it's there, to see me through another day.

Hearing, seeing, feeling, tasting, and touching -- we get a lot of pleasure and pain from our ordinary senses, which we know as they're mentally registered in the brain. Intuition's up there somewhere too, feeling more like a friend in the attic who swoops down when you need him, then ducks out of sight after the need passes.

One of the biggest immediate needs is to avoid danger. So I'll always find myself looking all the various directions, scanning the scene and registering it. But it's those glimpses right at the periphery, or those quick insights on a large collection of sensory input, that really impress me most. If you've got it, the best way to use it is not to use it; just let it do its own thing. Too much consciously trying to stimulate it and you're blocked. Unless an actual immediate need arises, especially unforeseen. Then you have to trust yourself, and in the end, nurture intuition the best you can.

But my focus can't be intuition as a general subject. With my role as one of the country's leading residential industrialists, I need to put this vital information out there for the benefit of my industrial compeers. Each of them, from Ted down the street (making vats) to Ike across the road (in the truck business), can learn to trust his intuition in the industrial field. As each man does so, he will have a greater level of confidence that everything's going to work out for the best. And to get out of the way.

In my opinion, they're miles ahead of others who aren't in industry, because I've found that industry itself enhances intuition. That's the way it's been with me. Because it looks like the more scanning you're doing of the scene, the more intuition you have. And with a million and one challenging circumstances in industry, there's always something unforeseen popping up. Forklift problems, spoiled parts, fights in the break room, a fire in the warehouse, a dead mouse in the water softener -- the list of problems we face everyday is endless.

Industry has so many drawbacks -- I'm not meaning to discourage anyone! -- that you always have to be on your guard, open to what the moment might bring. And one source of so many drawbacks has to be our workers. Workers, of course, are our biggest asset, because we couldn't do anything without them. But they're also perhaps our biggest headache, just because they are.

And we have some real lulus! Most of these cretins don't know the slightest thing about any of this. So the industrialist, you see, has to have a lot of intuition, because he needs it to make up for their lack. They have no foresight, no sense of responsibility, and, in so many cases, no intelligence. You have to step them through every little thing because of their terrible incompetence. They don't know a girder from a girdle.

It sounds harsh, but, thankfully, it's not true of everyone. Although we do get a lot of stupid people, mostly guys under 25, as you would guess, who've grown up not knowing a thing. Whenever there's a terrible accident, it's usually one of these dunces involved. They've never had to take responsibility for anything, so if a hundred pound part, say, comes falling out of the upper lines, they're usually the ones who'll get clunked. You never want to say to one of these idiots, "Don't put your hand in this," indicating a dangerous place to put your hand, like a punch press or a box of tightly packed gears, because they'll think you're kidding and do it anyway. The look of grave concern on your face or your profusely sweating brow don't stimulate any sense of consciousness or intuition in them.

But thank God, there's enough irresponsible, drunk folks down on Skidrow having illicit relations every night, because that's what we depend on to keep our reserve of cheap, albeit stupid, labor high. These kids are such idiots, you don't even have to give them a paycheck, just an occasional case of beer and carton of cigarettes -- and maybe a gift certificate to a tattoo parlor at Christmas -- and they'll show up ... when they do. They're tearing around the parking lot in their cars, but you close the gate and get out the cattle prod and eventually you can herd a sufficient number in. Most of them can get enough things done, the really simple stuff, that it's still beneficial to have them around. Of course, having them around is a real double-edged sword. You need all your senses, and that includes intuition, to counter the great danger.

Intuition, then, is something that's hard to describe and define, even for the intelligent industrialist, but it's with us nonetheless. And the more we learn to depend on it -- which usually happens if we're glancing around all the time like a bird leery of predators -- the more it'll be there to help us. Each of us will be more successful industrialists the more intuition we have, and the more we learn to trust it.
Posted by dbkundalini at 4:34 AM