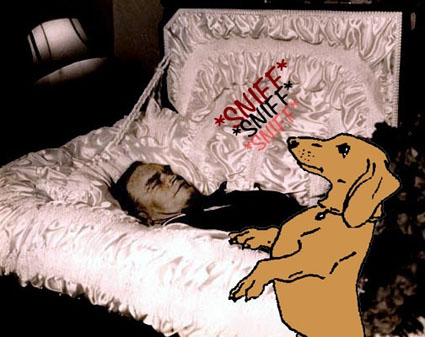 An FBI cadaver dog registered a "hit" at one of the local funeral homes today, according to FBI spokesman, Ed Hoogar Javer.

The deceased had apparently disappeared from the mortuary recently, leading police on a thorough search of the premises, inside and out. His family was beside themselves, for a time being suspects in the disappearance, their motive ... money, there having been a family dispute about their inheritance.

An affadavit stated that the cadaver dog indicated a "positive hit" for the scent of a deceased person, having sniffed the premises for less than five minutes.

As it turned out, there had been no foul play. The deceased was simply rolled from one room to another by the cleaning lady, who then went on vacation. The question was raised why the police failed to find the body in their thorough search. Their explanation was that they are not dogs and so of course do not have the same keen sense of smell.

While there, the dog found four other bodies -- none of which was lost -- including one whose funeral service was in progress.
Posted by dbkundalini at 4:43 PM