The Last Will And Testament Of Edgar D. Scuzworth 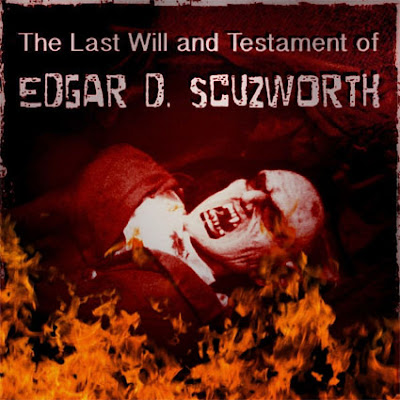 We're almost to Halloween once again, which always reminds me of the same thing, the kids of this one town getting their costumes and candy. Because they had a real champion in Edgar D. Scuzworth, of blessed memory.

But of course it would've never happened had his family treated him right. I feel like calling them a bunch of dirty names, and maybe you can guess what they'd be, but since there's a good chance the kids will be reading this, I'll just call them idiots, morons, and goofballs.

In my opinion, it'd completely idiotic if you're in for a big inheritance but then you're not patient with the person who is your benefactor, even to the point of wishing him dead, or worse, trying to hasten his death. Some of the idiots, morons, and goofballs thought they could speed it along, then get their grubby hands on his fortune, a considerable fortune ... of exactly $80,000,000.06. That's right, $80 million and change!

Of course it's always best to love our loved ones, money or not, but that very elementary, common sense concept had eluded Mr. Scuzworth's family. There was his crummy daughter, his terrible son, and his hateful wife. But it's not like he didn't see it coming. A guy with his brainpower -- he was very smart -- knows what's going on. He was smart enough himself when his father died to get the fortune, old money, from the famous Scuzworth Tire Company of the 1930s.

Mr. Scuzworth took care of the money over the years, he didn't waste it. He took out enough to live on and that was it. I think that's smart, except it created resentment in his family. His crummy daughter always thought she needed more, his terrible son was never content with his pittance of an allowance, and his hateful wife hated him for his frugality. She wanted to dress like the other society ladies. La-dee-dah! And that's the way it went all the way up to the time Mr. Scuzworth got sick and was about to die.

Well, to make a long story somewhat shorter, a necessity in this day of short attention spans, when people would rather have their stories short and pithy, even to the point of leaving out vital information, such as the various murderous intrigues and plots the family concocted to kill the old man off, interesting to me if not you, at some point he wrote out his "Last Will and Testament."

So there they were, Crummy, Terrible, and Hateful, gathered for the reading of the will. (His death was painful and tumultuous so I shudder to describe it.) The old family retainer, so old he had dust on his toupee, read it in his slow, halting voice.


To my loving daughter, who has wished me dead for years, I leave the grand total of two cents.

To my loving son, who has always been spiteful and had it in for me, I leave the grand total of two cents.

And to my loving wife, who stayed with me through thick and thin, always thinking I might die more quickly and leave her the family fortune, I leave the grand total of two cents.

So, you see, that takes care of the six cents. But the real shocker was what he bequeathed to the children of the town:


To the children of the town, I will that $80 million be kept in trust, so that to perpetuity they can have a great Halloween. The money will be paid out annually to Halloween stores to keep the children in good costumes and well-equipped in other ways to have a great holiday.

Pretty cool, huh? Apparently he had one joy in life, since his own kids were so bad, and that was the kids who came around at Halloween for Trick or Treat. They were scared to death of him, being a scary looking old guy, and he liked that. And so it is, to this day, the little town has about 40 Halloween stores that set up for two or three months a year. With around 200 kids in town, the stores, to get the money, really load them up with costumes.

They also have Scuzworth Days, including a big parade of the kids in their costumes, financed by the Halloween stores, who then write it off their taxes.

What happened to his hateful son, his crummy wife, and his terrible daughter? Suicide, boom, boom, boom!
Posted by dbkundalini at 5:28 PM