The Legend Of Paul Boone 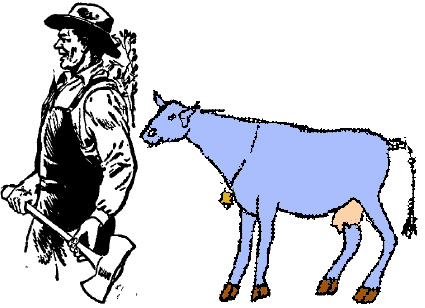 I've got kind of a heartwarming story today, of a true incident, something that actually happened and that I personally witnessed. This is true, I can't believe my good luck in just happening to be there when it all went down. But, who knows, maybe it was divine intervention, with me being right where God wanted me to be so I could witness this...

Well, I've thrown out enough clues, so you've probably already guessed what it was. Yes, that's it, I just happened to be at the public library, and just happened to be passing through the hall when they were doing the children's story hour! I was really in a hurry, and it's the weirdest coincidence that I overheard what I did, making me stop and linger just a little while.

I was passing by, like I said in a hurry, when I heard the story lady reading something about Paul Boone and Babe the Blue Ox. And I stopped dead in my tracks, because I couldn't believe it. That was always my most favorite story when I was a kid. And honestly I figured it was dead and gone as a story, since I know that kids are into so much more these days, with Pac Man, pogs, Pikachu, Pokemon, and Game Boys. I didn't think they still sat still long enough to hear the old stories!

But there they were, just like me all those years ago, looking up at the story lady, and I think she might've been the same one I listened to 50-some years ago, a little longer in the tooth, of course, but still fighting the good fight of reading books to little kids. So I lingered, I listened, and I heard her pleasant reading, only interrupted occasionally by a raspy smoker's cough, then the kids asking pertinent questions about where Paul got Babe, etc.

Good grief, it really took me back! Because, I actually can remember most of the details of Paul Boone's story, and how he had such big footprints that he created all the lakes in Minnesota! And how he had Babe the Blue Ox there as a kind of sidekick, or maybe a friend, a kemosabee, and someone to help carry their supplies.

I was going to go on for a while about Paul Boone, but, guess what, some of the details are eluding me. I thought I remembered them all. Let's see ... he had something to do with shoveling snow in Minnesota, I think, like in their very hard winters. Father Winter would be blowing from the North and Paul Boone would blow right back from the South, thereby keeping most of the snow out. Something like that.

Then there was the aforementioned ox, Babe the Blue Ox, who was blue because after Paul Boone stamped out all the lakes, he beheld his own image in the water so often and so long, that he became blue. Kind of a karmic thing, whereas he was normal color before the change. Then Paul Boone had to think, "Do I want a blue ox? Won't people point and stare?" He thought it over for an entire century -- the basic time-frame of legends being a lot longer than our own time -- and decided, Babe was cool even if he was blue.

OK, now I remember another detail. Paul Boone went through Minnesota with a big axe, the head of which was the size of a locomotive. He was able to cut down a fairly big forest in a few hours. He did that, providing lumber for the people settling the area. Which is probably why the people of Minnesota are so terribly lazy even to this day; they're always expecting someone else to show up and do their work for them.

I'm glad I passed through the library when I did. Because otherwise, you know, I wouldn't have heard what I heard when I heard it. I would've merely gone there and done whatever else it was I would've done.
Posted by dbkundalini at 8:09 PM