Incredible Atmosphere At This Bar 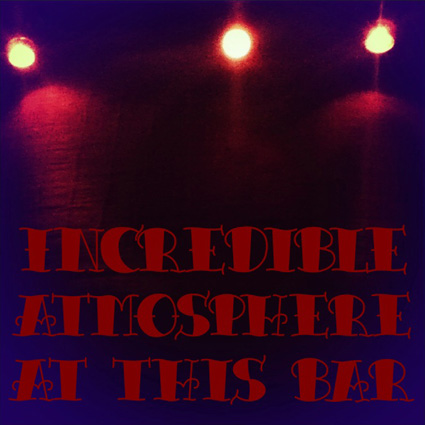 The minute I walked in the room, she could tell I was a man of distinction.

I was dressed like usual, including your usual brimmed cap. Leading the solitary woman at the bar to ask me if I'd been fishing. Oh, baby, with a come on like that, I love it! "No," I said, "I haven't been fishing for years. Why, do I smell bad?"

"Maybe you do but I can't tell from here," she was direct, "it's just the cap made me think of fishing, that's all."

"No, and I'm not really a cap guy, but my doctor thought I needed to wear one, you know," (I gestured at the ceiling where the sun would be if we were outside and it was daylight), "the dangers of skin cancer..."

Right away, I thought, no one mentions skin cancer, that's crazy, and I'm not -- I'm probably not -- in any danger of skin cancer. But that's what most people think, then, WHAM!, the doctor lays the bad news on them.

I looked around. This bar had an incredible atmosphere, small, cozy, a sweet little place that no one ever goes, except for a group of people out on the fire escape, a few people in the front room, then off to the side a few more, then me, then the bartender, and finally the solitary woman at the bar.

The bartender told her, "I'm cutting you off." She didn't seem sloshed, but she was loose enough to ask about my cap.

She clinked her glass a little, giving the ice something to do. I looked down, thinking this would be a great time to share a laugh if only something funny would happen. The bartender needed to go to the bathroom, so who would he trust to watch the tip jar? It was just her and me. I knew he could trust me; we've met before, whether he realized it or not. But she was telling him he could trust her.

He unzipped his pants and went off to the bathroom, perhaps not in that order. That left two people in the actual barroom, me ... and her. This doesn't happen to me very often, like this is the first time. I told her about the community event I'd just come in from. Then she got a call and complained that her phone doesn't work very well if her fingers are wet.

At that point, I got up and made my way to another room. To be, as it turned out, by myself in the dark. In the room you see in the picture above, with the three dim lights. Incredible atmosphere at this bar!

The bartender came out of the bathroom and was spiffing up the place. He wondered aloud whether the woman at the bar had bothered me. I said no, that I just wanted to be in this other room for a while. I needed to get the picture of the three lights for this blog. So there I am, arranging the tables, propping up the camera. This is one of those cameras where you have to push a virtual button (iPod) to take the picture, so that's what I did. It's a lovely picture, isn't it?

Then I dialed a service I subscribe to, a labeling service, and told them the caption I wanted to put on it, "INCREDIBLE ATMOSPHERE AT THIS BAR." I sat there nursing a Guinness while they worked on it. Then they messaged me right away, so I had to pull the Guinness away from my breast and confirm that I got it back.

I couldn't help thinking later, in one of those reveries that men have -- even well-established, safe-living men like me -- of what might've happened with the solitary woman at the bar. "Hey baby, do you date younger men?" "What do you mean younger men? You're pressing 60!" "Yeah, but with just these three dim lights, I have to look 20 years younger!"