The Two Ways Of Flicking An Ash 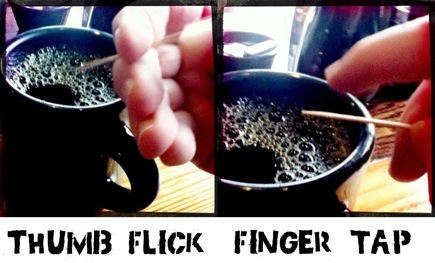 Smoking isn't cool. It's not cool to me. And I say that as a former smoker. It was a different world back then. But the same stupidity.

I was looking at a lady smoking the other day -- and I have maybe four or five photos of her, but I'm not posting them, as it turns out, as a matter of avoiding lawsuits from the people I dress down. If she reads this, maybe she'll know I'm talking about her, but how to prove it, that's her problem!

Anyway, I looked at her and was thinking, how can anyone with any intelligence (and she didn't look like your typical dullard) be sitting there smoking a cigarette? In this day and age! How gross, how despicable. Doesn't she know that her doctor's having a fit? Doesn't she know her life insurance rates and maybe health insurance rates might be so much less? Doesn't she realize that lung cancer is a real pain in the ass?

I myself, as I said, quit. I quit cold turkey. It was a long time ago, 1978, and the first few days were terrible. I bought a pack, then threw them away, etc., the usual story. So I know how hard it can be. But once you exercise a little discipline, a little willpower, and this is key, once you make it X number of days, you've got it made. The only puff of anything I've had since was off a cigar in the '80s to celebrate a friend's proud papa moment, and that's it. The thought of smoking now totally sickens me.

But I remember how it went, of course, as dramatized in the pictures. There's two basic ways of flicking your ash, of course with variations.

1) Flicking with your thumb. There's some real violence to the ash with this one, because it doesn't see it coming. Your thumb is back behind your curled fingers. So the ash is sitting there thinking it's safe. "I can grow out to there and no one will be the wiser!" Then, as a total surprise, it's dislodged from its perch and is the sudden, unexpected victim of gravity. It's severed so quickly, never to be reattached, and never to recover. What a shock!

2) The finger tap. This one is gentler and noticed more often by the ash. The finger's right out in the open. It's not sneaking up on anyone. And it never has the same violence as the thumb flick. The same force is not exercised. Maybe it's because of the downward motion, you're not bucking gravity. Maybe it's because of the leverage, you're closer to the ash. But I think it was more to do with not wanting to break the cigarette in half. Just a tap gets the job done. The result is of course the same, the ash falls, but without the same trauma.

If you smoke, quit. If you don't smoke, don't start. If you start and don't quit, don't smoke around me!
Posted by dbkundalini at 10:36 AM