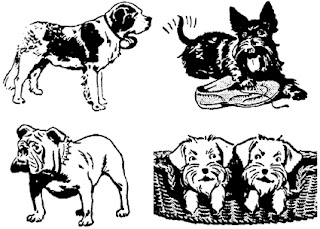 This is the story of The Dog Gutterer, sort of like The Dog Whisperer, except this guy has to get in there down and dirty with psychological tricks to trick the dog back into complacency.

I heard this story, I think its first roots are in the dog show circuit, where any nasty thing can happen. They may look like innocent friends, but the animus is raw ... because of what they've seen and had to put up with. Just as an aside, I don't believe I could show dogs. It's just such utter nonsense.

Let's pick out a scofflaw dog, since the way the story came to me there was one. And since there is a particular dog that we're not a fan of -- the pitbull -- let's let the pitbull stand in for our bad boy. (I was actually warming up to pitbulls a few weeks ago, then I heard of another one ripping up some girl's hand again, and that ruins it again for everyone.)

All right, the dog show (another damned dog show) is underway. And since we started this story, off camera, everything's gone completely to pot, with one dog, a pitbull, having taken over. He's got the judges rounded up and has chased them out on to the ledge of the building to a corner. They're cornered and he's leaping at them, his attitude not quite as raw as long as they heed his authority. But anytime he discerns a false move from any of the gathered party, he's nipping at them fast and furious. Even nervous moving of the feet bothers him. The party is looking down at taxis and bystanders looking up pointing. At this height, all hope is gone.

Inside, all the people have the other dogs in pens. There's a guy with the pieces of a stun gun on the floor, and a few guys are trying to figure out how to put it together. They're cussing and wringing their hands. The pitbull's owner is over pleading with them. He's at his wits end, pleading, "Don't kill him!" (Those closest to the dog are of course the most blinded.)

Then, at some point in this whole sad gathering, someone has called The Dog Gutterer.

The Dog Gutterer comes through the door. No tools, no bag, no cape, no superhero costume. About all he has is complete confidence and a special in with dogs. It turns out dogs both hate and love eye contact. They hate it if they don't see confidence behind it. They love it if they know you're going to put them in their place and be their boss. But you've got to speak their language!

The Dog Gutterer looked around, found the person who'd called him, went over and scoffed at the stun gun proceedings on the floor, then did a few knee squats and took a cleansing breath. It was like yoga. He had to tell himself, mentally and in silence, that he was the Dog Gutterer!

Then it was to the window and to the ledge, and around the corner and to the scene of the crime. The pitbull had the judges huddled and wasn't letting up with his threats. But now he had The Dog Gutterer behind him to deal with! He was split. What if the judges get away? But what if this guy behind him jumps him?

To make a long story short, let's just tell what happened in the barest of terms: 1) The dog backed up, feeling that a confident attacker from the back was a priority to the huddled judges. 2) The Dog Gutterer started in with his "guttering," making guttural noises, very tricky stuff that was confusing to the dog. 3) The dog thought to leap at him, but the look of confidence on The Dog Gutterer's face, as well as the queer up and down, weird cadence of his guttering took away the dog's resolve. 4) The Dog Gutterer led the dog back into the room, then down the elevator, guttering all the while, then out of the building, where he was hogtied and disciplined by his master in the parking lot.

The judges were so traumatized that they left their sham work of judging dogs behind and got honest work. Because as everyone knows, there's no dignity in judging dogs. It's pure idiocy.

As for The Dog Gutterer, he's still out there somewhere, waiting ... patiently waiting for a dog, maybe your dog, to act up.
Posted by dbkundalini at 7:23 PM