The Harder You Applaud 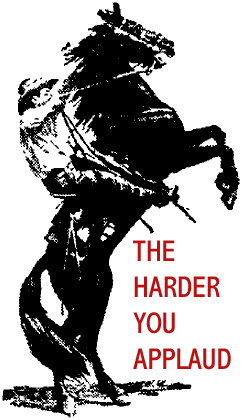 It could've happened to anyone. The horse just dropped dead.

He knew all the tricks and liked to keep the audience happy. But being a horse, he probably didn't know they'd be happy if he just showed up and gave an average performance. No one's expecting a Las Vegas revue out in the sticks.

Looking at the audience, personally I wouldn't try very hard at all. If there was ever a gathering before apparently missing that many chromosomes, I've never seen it. And those were just the ones paying attention. Mom and Dad were over there slapping little Sally for wanting cotton candy. And a few of them had lost their helium balloons within minutes of buying them, it was ridiculous.

I myself would've gone to the bathroom before the horse came on, but I didn't want to miss the clowns scooping up after him. They're always trying misdirection tricks with the audience, but I'm careful to follow the shovel. Keep your eyes on the shovel...

A guy named Toby was the announcer, and he knew how to get the audience revved up, telling us about 10 times, "The harder you applaud, the harder he'll work!" The cowboy took his horse through a series of steps, then jumps, then was racing him around the circle.

We applauded politely for the steps he took, being mostly one foot in front of the other, then crossing his legs, then a cute bow to each of the three sections. I liked the bows and applauded louder for those. Other joined me, with not just clapping but whistles.

Toby came out, his hands over his head, and called to the crowd, "The harder you applaud, the harder he'll work."

Off then he went, with many jumps over gates, getting always higher. We applauded like you might expect for the smaller gates, then louder for the medium-sized ones, then quite a bit louder yet for the higher ones. He jumped with all his might and cleared them, although he hit one of them with his hooves. We applauded even harder to make him feel better.

Toby stepped up and cranked us up some more, "The harder you applaud, the harder he'll work!" The rider seemed to sense something was wrong and acted like he wanted Toby to knock it off, but he didn't catch his drift.

It was time for the circles. The horse went running around the circles, running fast, cantoring, leaping, going ballistic in all the ways that only a horse with nothing but his legs and mad skills can. The applause was deafening, with the horse responding as trained, working harder and harder and ever harder yet.

Finally, it was time for the coup de gras, The Spectacular Deliverance of Beauty, with the horse meant to convey a threatened woman out of the hands of Black Bart, an evil cowboy. She staggers out of the upper room of a saloon set, her hands tied, and jumps to the horse's back, which runs with all his might around the circle. The applause is wild.

Somehow she stays standing. And she's trying to untie her hands while keeping her balance. An assistant runs in with a stick and the woman additionally has to leap over it each time around the ring. The applause is crazy, with the horse running even faster, the woman leaping up, and the stick going ever higher.

Toby steps out of the shadows, and seems to sense a disaster is at hand. But by pure habit, he calls for the audience to give their most rousing ovation. "The harder you applaud, the harder he'll work!" Leading to -- what? -- a sudden heart attack, something! It was like an airshow but with a horse. The horse is going 40 miles an hour when suddenly his legs crumple under him. The audience is aghast.

The woman is thrown into the stands, her fall cushioned by Sally's cotton candy ... and Sally, who turns out to be the only human fatality.
Posted by dbkundalini at 4:57 PM